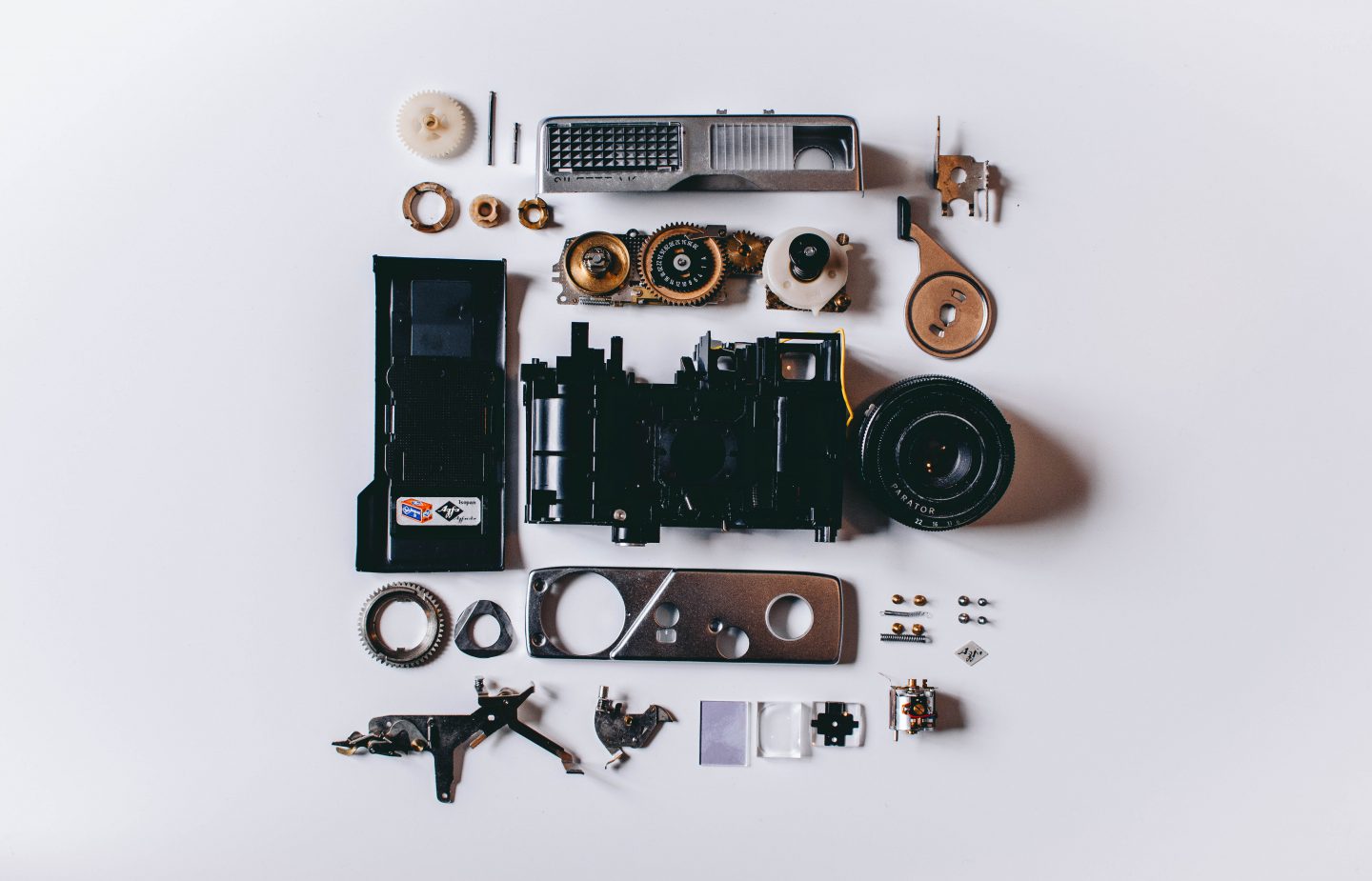 Tips from a Screenwriter: Using Big Screen Techniques in Your Branded Content

What do Apple and Aaron Sorkin have in common? Alliteration aside, they’re both in the business of telling great stories.

Today, the lines between storytellers and marketers are more blurred than ever. Many of the best branded content initiatives, like Nike’s “Breaking2” or Square’s “Yassin Falafel“, feel like feature films: they have characters to root for, a familiar structure and key themes that drive the story, among many other things.

Marketers and branded content teams can take away key lessons from the big screen — which is why we brought in real-life screenwriter and producer, Rachelle Chatrand, to school us on the elements of a great script.

Chartrand has played almost every role in the worlds of film and TV: actress (Stargate SG-1 fans will recognize her), writer, producer and crew. Most recently, she launched her own production company and is actively developing her first feature film, CHAINED.

“Screenwriting is very scientific,” Chartrand explained. “When I’m starting to write a screenplay, or even better, when I’m working as a script consultant, there [are certain] things that I look [for] in a screenplay: structure, character development, stakes, themes, etc.”

Sitting on the rooftop patio of our Hollywood North office, Chartrand shared some insights into how she spots a good script and the components that any successful story should have.

Characters That Drive the Story

For a character to drive a story, they need to make choices that move the action forward. Things can’t simply happen to them; otherwise, they wind up becoming a victim instead of a hero.

“They need to choose to embark on the journey. I mean, if they don’t want to do it, why should I watch a movie about it?” said Chartrand.

Frodo choosing to carry the ring is a good example of a character driving the story.

The actions a character takes also need to be important; a decision in the first act must have an effect (good or bad) in a later act that has a significant impact on the story. If the ending is inevitable, your character’s choices are irrelevant, and your viewers lose interest.

Featuring characters that an audience can relate to is critical for branded content. Why? Because it humanizes a company. One of the main goals of branded content is to create trust and affinity with readers, which is tough to do without getting a little personal (and even vulnerable). Finding a main character for your content — often a consumer, a seller or someone from your own organization — can add a personal, emotional touch to your content that will position you as a compassionate and therefore trustworthy company.

Structure That Recaptures Audience Interest Throughout

While there are exceptions to the rule, most successful Hollywood movies follow a similar three-act structure. This structure is popular because it ensures incidents happen at key moments to recapture audience interest and propel the narrative forward.

For example, Act 1 usually includes an inciting incident, an introduction to the main character’s world and a decision made by the protagonist that sparks change. This inciting incident needs to happen quickly to hook the audience’s attention. According to Chartrand, including it in the first 10% of your content, or 10 pages of your screenplay, is a good rule of thumb. 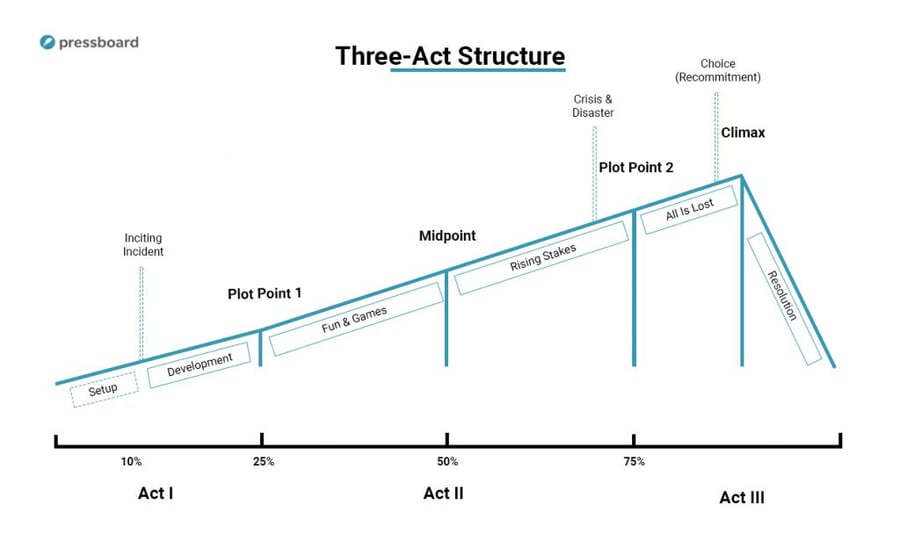 Consider the hit AMC series Breaking Bad. “[Walter White] starts off his life and he’s a bored, unfulfilled — bitter, even — teacher. Something happens: he passes out. He finds out right away that he has cancer,” said Chartrand. “The setup, you want it to be very short, especially nowadays with shortening attention spans.”

It’s a lesson that can apply to any kind of content. For example, Toyota BC Dealers created three videos in 2017 to promote their line of hybrid vehicles. The video in which the concept and tension was presented immediately — a.k.a. the video in which the setup was the shortest — was ultimately the most successful and captured viewers’ interest the longest.

A Theme or Message That Viewers Can Connect With

Star Trek is arguably one of the most popular television series of all time, but it doesn’t owe its success to its special effects (I know, bold words) or even to its otherworldly setting. It succeeds by addressing moral issues that we can understand, such as in the episode “The City on the Edge of Forever”, when the crew must choose between saving millions of lives or saving someone they love. Similarly, in “The Measure of a Man,” Captain Picard has to argue that Data (the ship’s android) has rights as an individual and can’t simply be rebooted.

Even though the characters are robots and aliens (and the occasional human), the moral dilemmas experienced in Star Trek are similar to those we face in our daily lives.

“That’s why you can have a total sci-fi movie and people will resonate with it, because there’s these human themes that we all connect with,” said Chartrand.

When creating any kind of content, think about the message you’re trying to deliver to your audience. How can you relate your product or values to something people care about? Connecting your content with the challenges people face in their everyday lives is a powerful way to begin telling resonant and compelling stories.

Giving people something to believe in — along with characters they can root for and a compelling narrative — should be the goal of any storyteller, whether you’re writing for the big screen or your next big campaign. The next time you sit down to brainstorm some branded content ideas, consider bringing a little popcorn and some silver screen classics along with you.

Studios
How The Best Brands Create New and Exciting Travel Content
March 5, 2018
by Melanie Deziel
by

Tourism, and hospitality brands have some of the richest fodder for travel content, with entire cities full of stories to discover and..

This report was compiled using data from Pressboard Studio between Jan 1 and Dec 31, 2020.

At Pressboard we kept hearing the same question..

This report was compiled using data from Pressboard Studio between Jan 1 and Jun 30, 2021.