Last week Buzzfeed leaked a copy of a 96 page internal New York Times report. The NYT Innovation Report is a hard look at the science of putting the news in the hands of the readers. The report may focus on the Times, but it is a valuable resource for every publication. Now, since most of us don’t have time to read through nearly 100 pages of deep study, Pressboard has summarized the most salient points into a 5 minute read for you.

The 21st century has been a stormy time for newspapers. The rise of digital and fall of advertising rates have taught newspaper executives how to spend less to achieve more. Through it all, New York Times has never sacrificed its Pulitzer Prize-winning journalistic standards. It remains one of the world’s most renowned publications.

Still, NYT is not impervious to struggle. The report outlined several areas where The Grey Lady is being challenged by technology, competition and drastic changes in the consumption of news.

Here is our summary of the key takeaways and graphs; 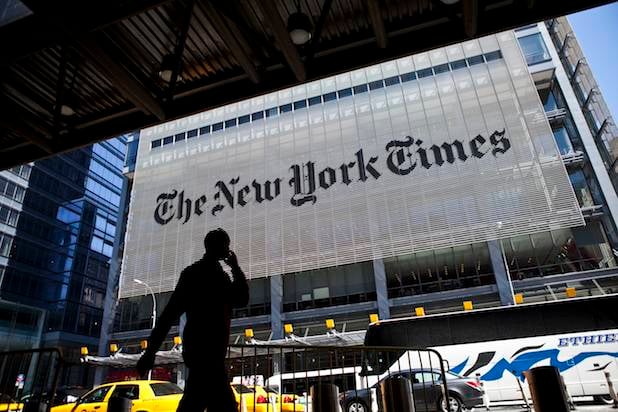 The number one goal for any publication is serving readers. More than ever before, news outlets must publish pieces that translate to numbers—shares and likes govern online publishing. While NYT has a vast audience, BuzzFeed and Huffington Post  are growing faster. With new players to the game such as Facebook Paper, NYT must become more innovative in its offerings.

NYT took a look at their goals, current approach and the focus they’d like to take. These strategies were separate, but they should work in tandem. 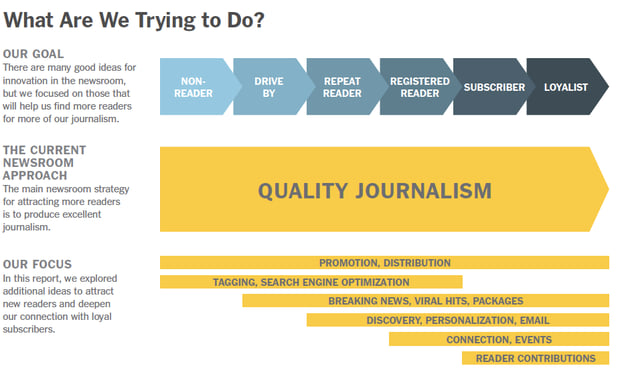 Digital first is no longer a publishing strategy; it’s the strategy. Digital first means producing the best digital newspaper without the constraints of the print newspaper. Digital first also means valuing digital skills as much as journalistic skills.

In March 2014, NYT became serious about providing digital-first content when it released its NYT Now app.

Shift Revenue Streams so that Digital Makes the Big Bucks

Making money off digital products is the holy grail. In order to be successful going forward, NYT must stop relying on its print advertising sales. 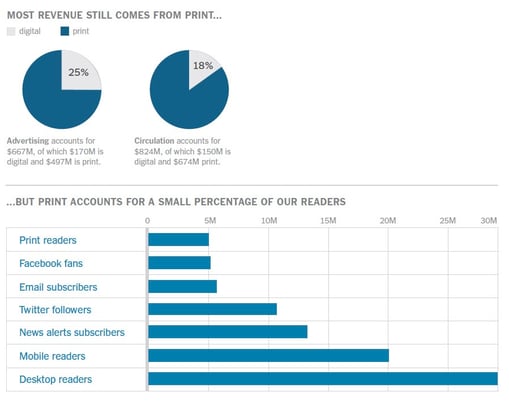 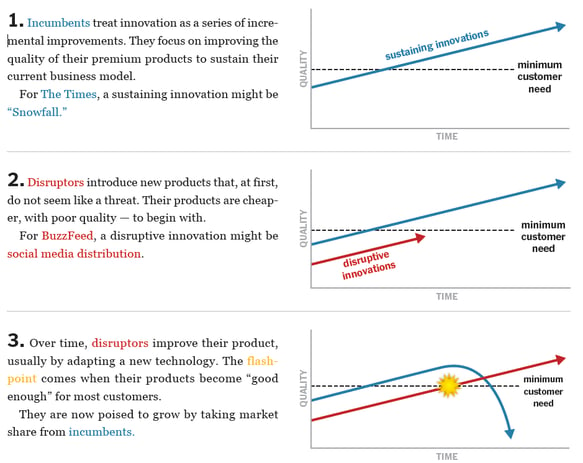 Digital media outlets are disrupting traditional media outlets including NYT. Medium, Quartz, The Huffington Post, BuzzFeed, etc., these are the disruptors the NYT is competing against. Think Kodak and digital cameras, or better yet: Kodak and Instagram.

Grow Your Audience by Finding Your Readers

In the high holy days of print, newspapers had vast networks of printers, trucks, and carriers to get newspapers into the hands of their readers. Why then was digital taken for granted? Putting the news on the homepage is like keeping the newspapers in the newsroom. It doesn’t work, especially in 2014’s crowded newsroom known as the Internet.

“For someone with a print background, you’re accustomed to the fact that if it makes the editor’s cut — gets into the paper — you’re going to find an audience. It’s entirely the other way around as a digital journalist. The realization that you have to go find your audience — they’re not going to just come and read it — has been transformative.”

It used to be that readers found their news by visiting the homepages of their favourite newspapers. No more. Now news is accessed from Facebook, Twitter, and Flipboard.

Promote Your Articles via Social Media — No Really, You Need To

Quality journalism always comes first, but in 2014, once a story is filed, the work truly begins. Journalists should tag, distribute, and promote every article. Why? Social media rules all. It’s where your readers can be found. 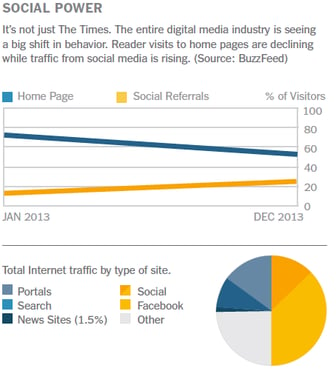 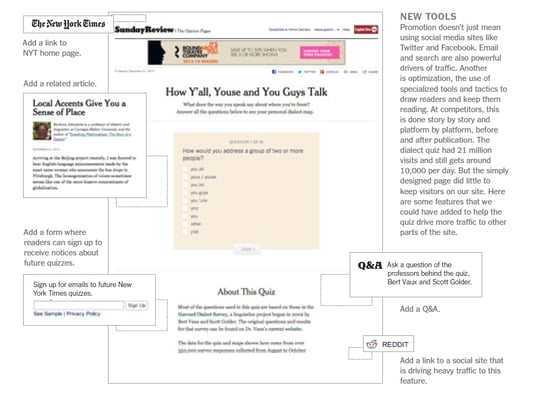 Reporters need to incorporate social media channels as part of their reporting efforts. Some channels are more effective for sharing headlines or photographs. 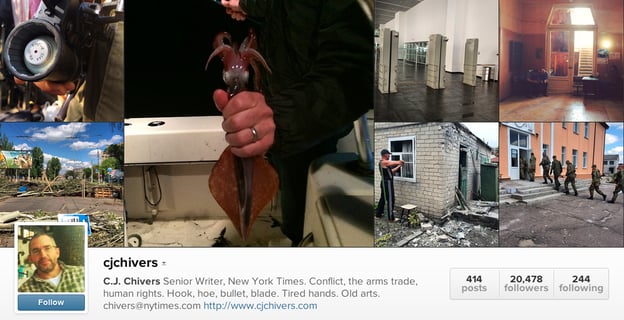 Don’t use Twitter bots, but rather curate influencers who are experts in their fields for the given topics. Allow these influencers to disseminate your stories. 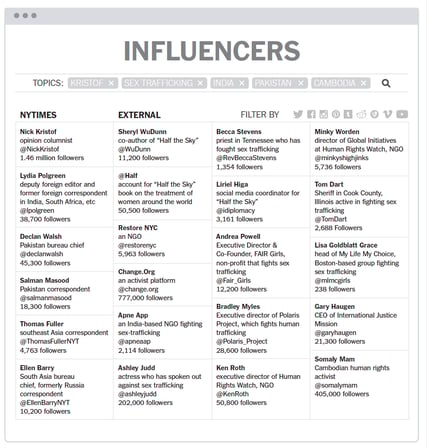 Mine Your Archive to Revitalize Old Articles

NYT has a 163-year-long archive with over 14 million articles. This is free content. While some news is ephemeral, some articles retain interest. Provide context. Connect the past to the present. NYT is a timeless library complete with pieces that garner thousands of readers months after publication.

Abide by these Best Practices for Experimentation

Metadata Is the Lifeblood of Your Publication. Creating databases and tagging articles is how content is found on the Internet. Waiting is costly. You’ll have to structure your content — and waiting means a larger backlog. NYT has over 14,700,000 articles. That is the backlog that no one wants.

For the first time, the newsroom and business departments of NYT are focused on one thing: serving readers every day. Creating a Reader Experience department is one way to make sure someone in the company is focused on the readers on a long term basis. These staffers can look at the big picture and develop long term goals and strategies. This allows other staffers to focus primarily on their day-to-day tasks.

No Longer Can Church and State Remain Divided

In a digital-first world many parts of the business-side of publishing will need to work closely with the newsroom to improve the overall reader experience.  The report recommends that these two areas begin to blend and work together. 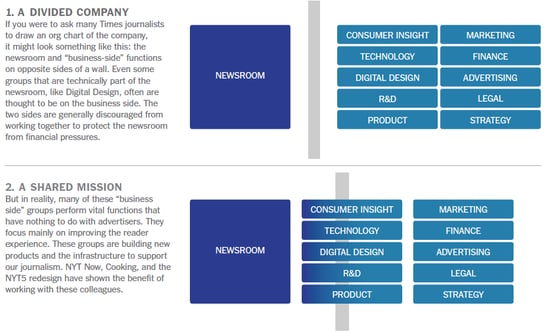 Experimenting with new strategies is the only way to innovate. Failures are important learning opportunities. Let only the winning experiments live. Don’t waste precious resources on mediocre experiments.

Those conducting the NYT study found that the heads of other publications engage with each other about what works and what doesn’t. Adam Moss, editor of New York Magazine spoke about his regular conversations with senior staffs at Gawker and Slate.

How to Get There

The Bottom Line: Business and the Newsroom Need to Work Together

Digital media outlets are growing faster and readers are being bombarded with more choices everyday. In order to stand out, even the most respected publications such as the NYT must innovate.

Although this report was originally an internal document, and focused specifically on the business challenges of the New York Times, the lessons apply to virtually every publishing entity. If you can spare some time and would like to read the entire report, you can find the full 96 page copy here.  We would love to hear your comments, please leave them below.

November 16, 2016
by Jerrid Grimm
by
They say that if you’re successful in the world of content marketing, you’re either data-driven or lucky. And while we could all use a..
2017 Branded Content Benchmarks Report (Infographic)

This newly updated report highlights the most important branded content benchmarks for marketers.

This report was compiled using data from Pressboard Studio between Jan 1 and Dec 31, 2020.

At Pressboard we kept hearing the same question..