Becoming a parent is filled with exciting firsts: the first time you hold your baby, the first time she smiles at you and the first time she sleeps through the night. But this new chapter can also leave you wrestling with questions like: since when are there so many sharp edges in my house? When was the last time I had my brakes checked? Do I need a new car? Do I actually have any idea what I’m doing?

Thankfully, there are publications like Fatherly whose sole purpose is to guide and advise parents — fathers in particular — as they navigate one of the most challenging and rewarding chapters of their lives. In addition to offering advice on raising children, they venture into other territory relevant to their core audience, like what’s new on Netflix, financial tips and how to approach dating after a divorce.

Since 2015, the publication has established itself as a trusted source of information, providing practical parenting advice, evidence-based insights and just plain fun content for dads young and old. Over the past four years, they’ve learned a thing or two about their audience as well — like the fact that 81% of their readers with a new baby had bought a car since those babies were born. So, when Chrysler approached them with an idea for a campaign built around their family-friendly Pacifica, they jumped on it.

The resulting campaign, “The Family Car,” consists of over 50 articles and videos that offer advice and insights for fathers that goes well beyond just the purchase of a vehicle. We spoke with Michael Rothman, Co-Founder and CEO of Fatherly, about the campaign itself and how the publication rose up to address a serious need in the digital media landscape.

(Disclaimer: Interview has been lightly edited for flow)

“The Family Car” campaign is a hub of information for parents looking to purchase a new vehicle.

Pressboard: Could you tell us about your background and how you got into this business?

Michael Rothman: Very early on, I had an interest in media. At 13, I put together a saddle-stitched paper magazine, which consisted mostly of photocopies of articles from Electronic Gaming magazine. It wasn’t ennobled with the word “curating” — that didn’t really come until much later. I was basically photocopying magazines.

Fast forward years later, I ended up meeting Ben Lerer, who’s starting Thrillist circa 2006. What we noticed was that our founding team was getting a bit older: they had wedding bands on and babies on the way. And they were also acutely interested in becoming better dads, better parents, but there wasn’t a digital-first publication that really spoke to their needs.

There wasn’t a deficit of information. It was actually quite the opposite — there was a glut of parenting content. So, the primary question that we wanted to solve was: can we curate what’s out there? Can we boil down the ocean and find five valuable nuggets that would be relevant to an audience of dads?

We wanted to create a product that would actually resonate with [our target audience] — and it turns out that parenting is a lens to reach men. Again, this is a demographic that interestingly hadn’t really been mined before. Or if it had, it had been mined for satire, like the ‘dopey dad’ trope. Maybe a guy would chuckle, but then he’d realize, “Well, it’s not me. It’s not the guys that I know.”

Fatherly [filled a need] due to the fact that we were actually helping real human beings in the world. It was also just very personally resonant with what I had been doing for 20 years. I had been a mentor to fatherless kids through Big Brothers/Big Sisters since early 1999. Then I got involved in this organization called Career Gear, which works with guys coming out of prison [by helping place them in things like] substance abuse programs to get them back on their feet and back involved with their families. That was a very animating force in my personal life. I realized, “Oh, this is a calling. I love doing this work, even though it’s not the most rewarding all the time.” 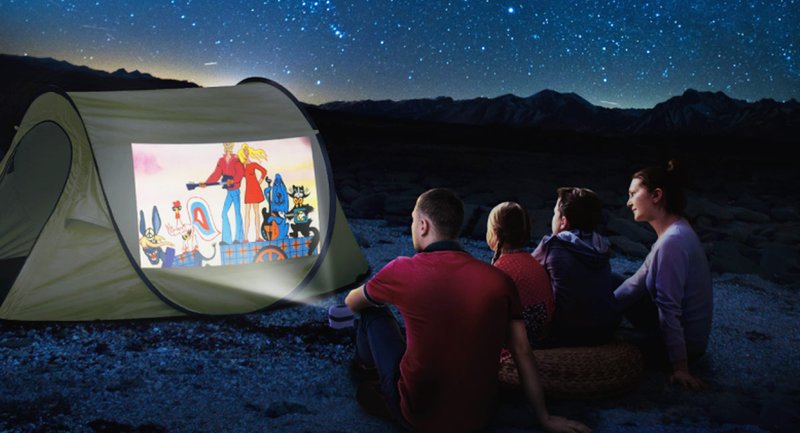 This projector was featured in the “Next-Level Car Camping Gear” story from the campaign.

A lot of readers probably assume that your audience is 100% fathers. Is that true?

The actual composition is about 50/50, male/female. When someone is making any kind of high stakes decision, they generally triangulate between three data points. The first is: “What does an unassailable expert have to say about this topic?” You also want to talk to someone else who’s in your position, who’s like you. You’re the same age, live in the same neighborhood perhaps. You want to see what that person did, just because they’re almost like an older brother. They’ve gone down this road before.

And then you want to triangulate that with your gut. You have certain instincts honed over tens of thousands of years to care for a child. That’s a valid data point. Usually once you blend those three, you get conviction on what to buy, how to act. That’s a driving force for us editorially that informs a lot of how we build Fatherly. And as a result, I think that the approach isn’t necessarily gendered. The content is relevant to everybody.

Can you speak a bit more about “The Family Car” campaign with Chrysler Pacifica, and how Fatherly lent its editorial style to the content?

Chrysler Pacifica realized that, especially for parents who have children between zero and two, roughly 81% are generally going to be in the market for a three-row vehicle, or for a new vehicle. Particularly if they have multiple children. It was a great point of market entry, and this is an audience that we know intimately well.

Our proposition to them was this editorial franchise called “Family Car Week,” where we were going to tackle the issue of family cars from every possible angle: from the practical, like evaluating the best three-row vehicles and evaluating the best car seats, to the more whimsical, like an illustrated guide to looks that dad gives in the rear-view mirror.

Perhaps one of the most easily recognizable (and fear-inducing) looks that dads give in the rear-view mirror.

It served a couple purposes: one, it brought Chrysler Pacifica front and center during a moment in which our audience was completely tuned into family car coverage; and two, it was an opportunity for them to win out in SEO. Anytime someone was searching for a three-row vehicle, we wanted to swarm that intent with any number of these articles that all linked to the Family Car Week hub.

And then within that, there were opportunities for branded content to talk more specifically about the new Pacifica itself. It felt very full-funnel and very contextually relevant. It was just really engaging content, and it’s content that also has a very long shelf-life. The great thing about the parenting market is that it’s an ever-filling bucket. So next year, there’s going to be another four million people who are going to be in the market for a three-row vehicle again.

What previous brand activations or campaigns has Fatherly had success with?

This is probably no surprise to parents with kids living in cities where there’s harsh winters that it’s really hard on the weekends to find stuff to do with your kid. And we saw that in the week of Toys “R” Us closing, parents were looking for some place to play with toys outside of a friend’s home, or outside of a community play space.

We wanted to build a big democratic play space to discover and play with toys. We ended up creating this concept called the “Fatherly Playroom,” which is probably one of the best things we’ve ever done as company for a host of reasons. But it was a physical expression of the Fatherly brand that brought the 100 Best Toys of 2018 to life, as selected by our editors. So, we had them all on display for kids not just to look at, but to play with. We partnered with about 15 different local activity providers to have wall-to-wall programming, where kids could do everything from baby yoga, to music classes, to language classes. It was in essence a real expression of what Fatherly was all about, and parents and kids went absolutely bananas.

We ask everyone what their favorite book is. We’re going to make yours a little bit more specific: do you have a favorite book for new fathers?

Well, we’re working on one coming soon. We have a franchise called My Father The, which is a series of ‘as told to’ stories from the sons and daughters of famous dads. Everyone from John Wayne’s son, Muhammad Ali’s daughter, Michael Jordan’s son, Pablo Escobar’s son. Really intimate portraits of men that the public knows, but doesn’t necessarily know their more intimate stories. It’s going to be kind of a coffee table book, replete with personal mementos that may have not been seen before. It’s coming out next year, but it’s something that we’re really excited about internally.

Studios pressboard news
Sponsored vs. Earned Media: Why Both Belong In Your Marketing Strategy
December 17, 2019
by Melissa Roach
by

What should marketers strive for, earned media or sponsored content partnerships? When it comes to telling your brand’s story, it can be..

How to Effectively Mention Brands in Sponsored Content (Study)