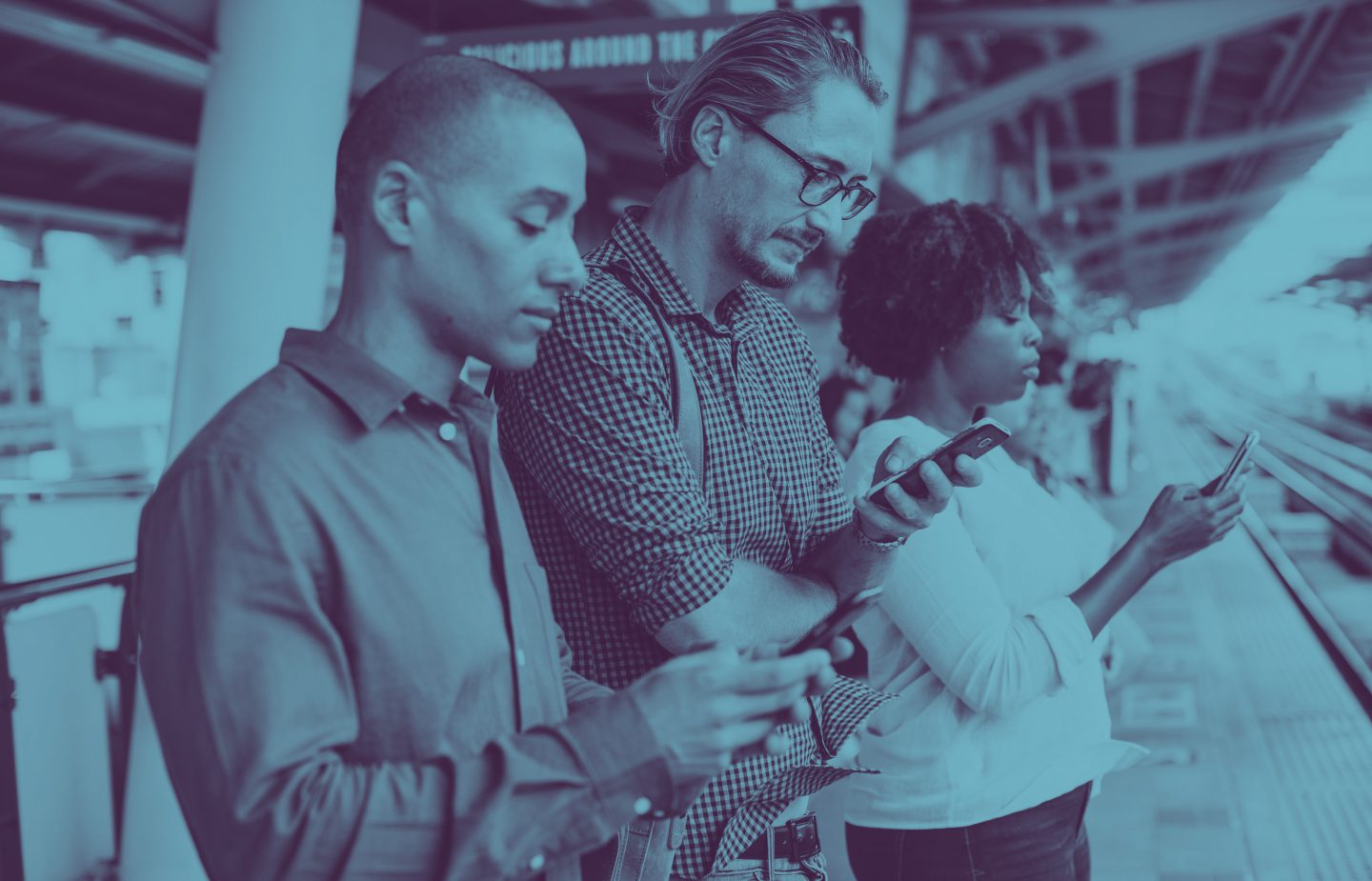 Where can brands find the best traffic for all of the content they’re creating?

At least, that’s what Digiday wrote earlier this year in response to Facebook’s announcement that it would be changing its newsfeed. Moving forward, the social media platform is prioritizing what friends and family share over posts from brands and publishers.

The announcement sent many industries reeling. Most brands have spent the past decade honing their Facebook promotion skills and building a network over the platform.

In 2017, publisher referral traffic from Facebook dropped 15%, just as distribution costs and ad rates rose. After the January announcement, Facebook traffic to publishers fell an additional 6%. That represents millions of dollars in lost revenue, which has already caused some publications to shut their doors.

Marketing teams find themselves facing their own set of challenges. It seems that companies will now have to shift their strategies to reach their target audience, whether by using more paid promotion on Facebook or adapting their tactics to other mediums. 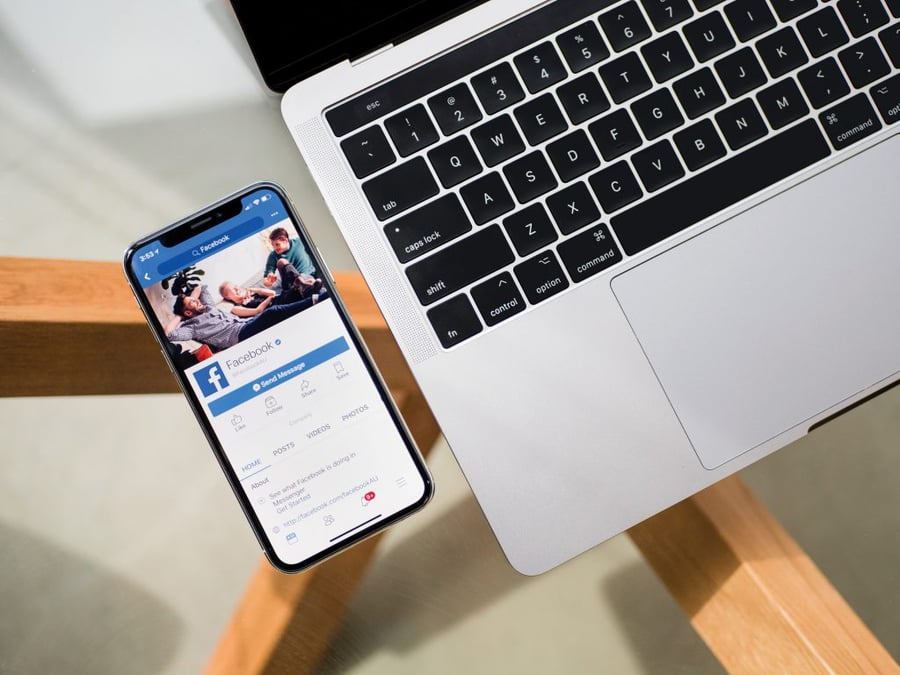 Here at Pressboard, Facebook’s changes got us thinking. As it’s our mission to help brands everywhere market themselves through content instead of ads, we began to question where we could find the best traffic for that content.

Would readers that came from search spend as much time or longer engaging with a piece of sponsored content than readers from Facebook?

Alternatively, if Facebook really is the best traffic channel, would paid promotion accomplish the same goals that organic traffic used to?

Using data from 1,961 sponsored articles published through Pressboard between November 2016 and March 2018, we investigated the strengths and weaknesses of different kinds of traffic.

Our goal was to determine whether the source of traffic (social media or otherwise) and the type of traffic (paid or organic) affected how readers engaged with it.  To find the best traffic, we analyzed engagement with the sponsored content by looking at two metrics: active reading time and percentage scrolled.

But that’s just the short version. Keep reading to discover how the best traffic sources and types impact engagement levels of sponsored content. With just a few tweaks, you can reach more engaged readers (who may turn into more engaged customers down the line).

When it comes to getting quality engagement on your sponsored content, social really is the best traffic source. Over the years, traffic from social sources like Facebook and Twitter has seen consistently strong engagement, with readers spending an average of 70.3 seconds reading a story. People that came in from other sources like direct, search and referral spent 25% less time with the content on average. 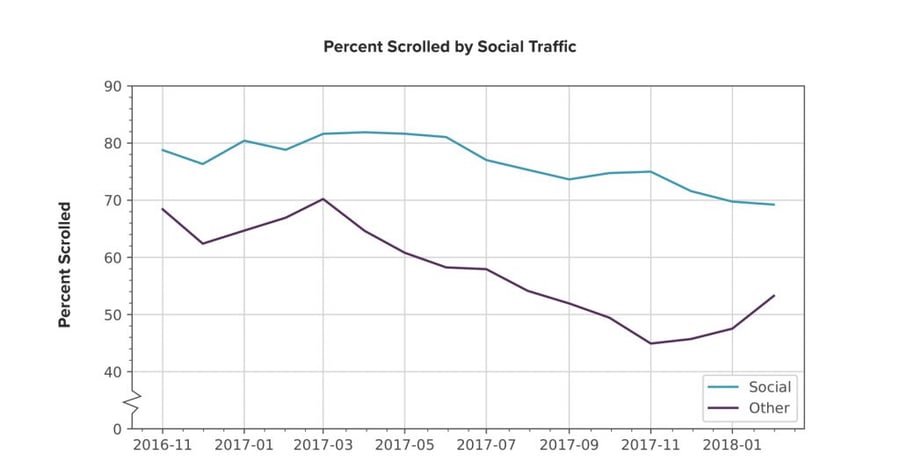 The gap between social and other traffic becomes even more apparent when you consider how far readers scroll down the page. Readers who came to content via social media scrolled an average of 76.7% down the page, whereas readers from other traffic made it down an average of 55.3%. Still, the performance of other traffic (such as referral, search and direct) has been improving over the past few months, so it’s something we’ll want to keep an eye on moving forward.

This data is proof to the point that if you want engaged audiences, the best traffic strategy is to target the channels they’re already interacting with.

But not all social traffic sources are created equal. As it turns out, while Facebook traffic may be harder and harder to get, it’s still incredibly valuable. Readers who find sponsored content through Facebook are likely to spend 70.3 seconds engaging with it and will scroll 76.7% of the way down the page on average. More Americans use Facebook as a news source than any other social platform, so it could be that these users come to the site in order to consume content, and therefore are prepared to spend more time with sponsored content.

LinkedIn readers spend an average of 74.5 seconds on content found through the platform and scroll 73.3% down the page. Twitter readers spend less time with the sponsored content on average (67.8 seconds), but scroll the furthest down the page (79.1%). These numbers are all quite similar, but note that these are averages across both paid and organic traffic. As we explore the differences between the two types later in the post, you’ll see that some social sources are more powerful than others depending on how you use them.

It’s important to remember, too, that engagement rates for readers from LinkedIn and Twitter represent a much smaller total amount of readers, as our data shows that on average, over 70% of traffic to sponsored content comes from Facebook.

Whether a reader clicks to your story organically or through a paid post also affects how they engage with it. 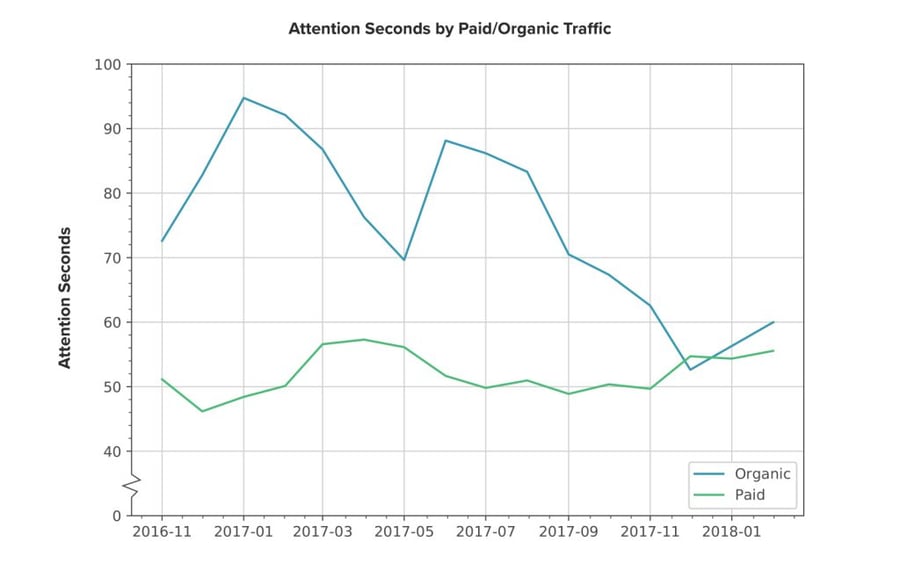 Organic traffic has consistently seen higher engagement than paid traffic concerning active reading time. However, the gap in attention seconds has closed over the last six months, with paid traffic engagement slowly climbing and organic traffic’s engagement falling dramatically. As you see in the graph on the next page, readers who come to a story via an ad also scroll further down the page on average than those who reach the content organically. 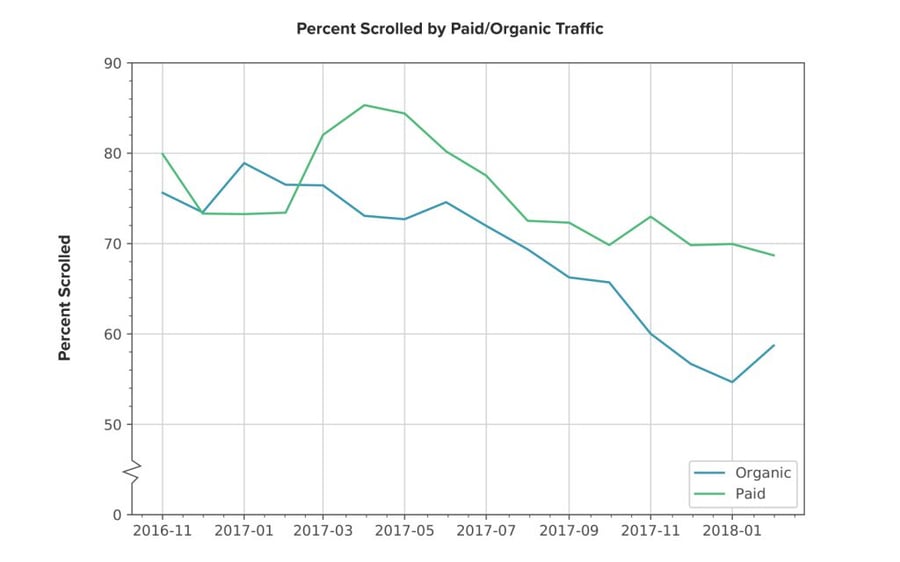 This may be explained by the fact that it’s becoming harder and harder to earn organic traffic. As a result, more brands and publishers have been improving their paid promotion efforts to get their content in front of the most relevant and engaged readers.

Best Traffic Type: Paid vs. Organic by the Source

Considering how different the quality of reads is between social and other sources, it’s important to look at each source individually when analyzing whether the best traffic comes from paid or organic. 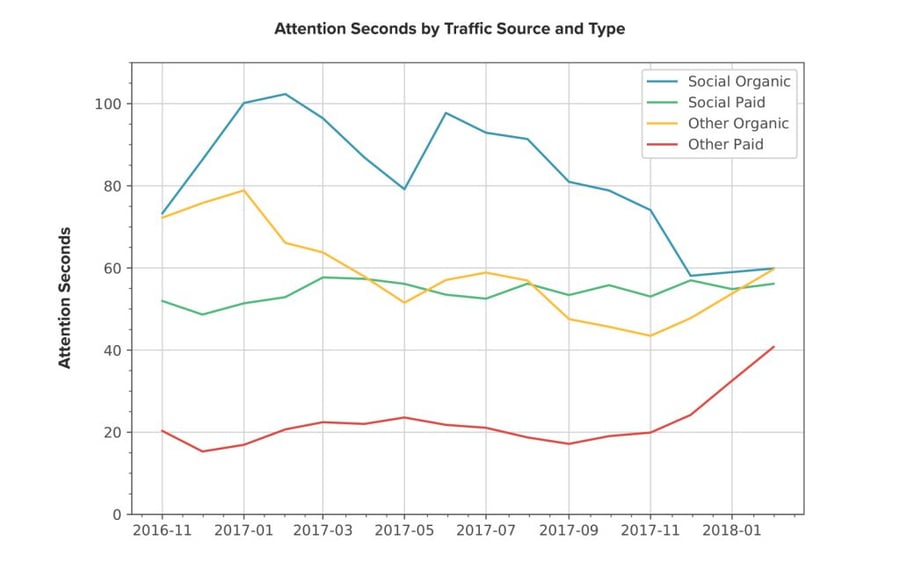 Organic social still has the best traffic if you want quality engagement with your sponsored content. Its success seems to be waning over the last six months, however. Marketers should monitor this trend, as both paid social traffic and other organic traffic are now seeing similar reader engagement statistics.

Paid social traffic has had the most consistent data over the past two years, with readers spending an average of 55 seconds on the page. Paid traffic from other sources like paid native and search has lagged, but is seeing increasingly better results over time. With paid traffic drivers, you can find people who are likely very interested in the content topic, so it makes sense that they would spend more time with it. 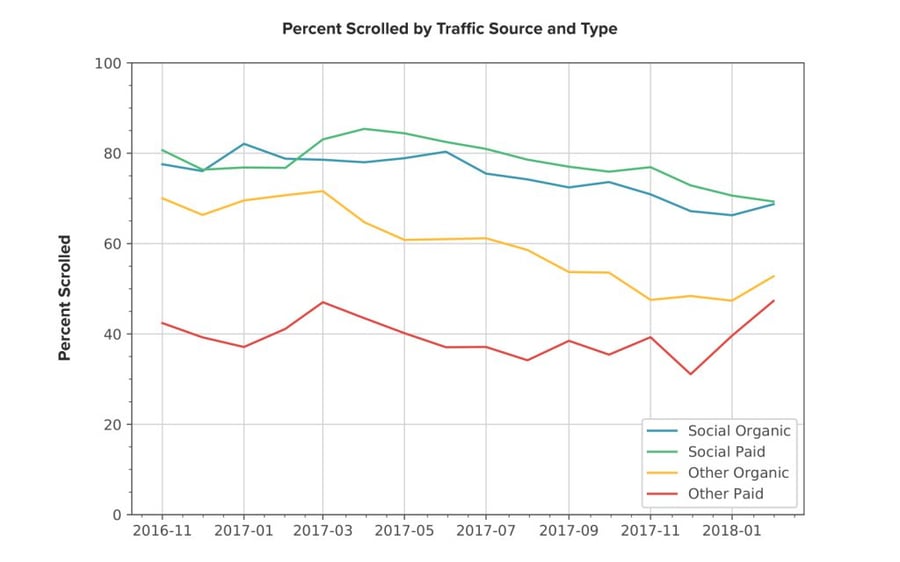 When it comes to getting readers to scroll down the page, social traffic — whether paid or organic — has performed well over time. The averages are comparable (75.8% for organic, 77.6% for paid), which indicates that how far someone scrolls is not significantly affected by whether a click comes via organic or paid. What matters most is the source of the traffic. As the data clearly shows, other traffic (referral, search and direct) sees readers scrolling less far down the page, reaching 56.9% organically and 39.1% of the way down via a paid post.

While these results are a good indication of the best traffic for sponsored content engagement, they shouldn’t lead you to invest solely in one kind of traffic source. Marketers still need to consider the size of the audience they want to reach and the platforms they use most frequently. What’s more, we’ve seen a drop in the quality of organic traffic over the last six months, while paid traffic quality remains consistent (and slowly increases). Using this knowledge in combination with the above data will not only make sure that your sponsored content is being read, but that you’re reaching an audience that will truly engage with and enjoy what you create.

“Social media has been an important source of traffic for editorial content for a long time, so it’s no surprise that it’s playing and increasingly important role for sponsored content as well. For publishers, this should be an important trigger for internal conversations about what organic social levers can be used internally, and how paid social media can be strategically added to media plans.”

“I’m struck by the spike in attention seconds for paid traffic. While organic clearly remains viable and critical — it’s one of the many ways we organically scale distribution of content programs here at NBCU — the commitment to paid mechanisms seems to be paying off, particularly on Facebook, LinkedIn and Twitter. It seems very clear to me that readers are savvier than ever and yet care less and less about why they are seeing a post, and more about the post’s contents and its source. That screams to me that readers want quality brand content that entertains and informs, and they want it from trusted sources. That’s a good continued lesson for trusted publishers, who also clearly need to heed the Facebook lesson of the last year and remain hedged when it comes to platform and paid vs organic.”

The data in this study was captured through Pressboard, which uses a unique attention analytics script to track user behavior such as scrolling position, screen type, clicks and the relative position of sponsorship assets such as they appear on a page. Pressboard stores information about how they engaged with the sponsored content, which gives us statistics like Average Reading Time (how long a reader spent with an article) and Percentage Scrolled (how far they scrolled down the page). We used these statistics when analyzing audience engagement levels from different traffic sources and types.

Using data from 1,961 stories tracked using Pressboard’s platform from November 2016 through March 2018, we created aggregate monthly measures of Active Reading Time and Maximum Percentage Scrolled to compare the performance of paid and organic traffic as well as social and non-social traffic. This allowed us to analyze how the quality of traffic from these sources changed over time.

This article was originally published in Issue 4 of The Science of Storytelling.

profitability
Why Do People Love Stories? It’s All About Sex, Drugs and Rock ‘n Roll [Webinar]

There’s a scientific reason why stories can convince people to do things they thought they’d never do, like vote for Trump or buy a hybrid..

The First Principle of Brand Storytelling: Tell the T.R.U.T.H.

Brands are in a constant battle to gain and hold the attention of their audiences, bending over backwards to craft content that’s..

The Robots Are Taking Over
June 5, 2014
by Rosie Sidle
by

Do you know if your readers are humans or robots? With nearly 1/3 of all web traffic..