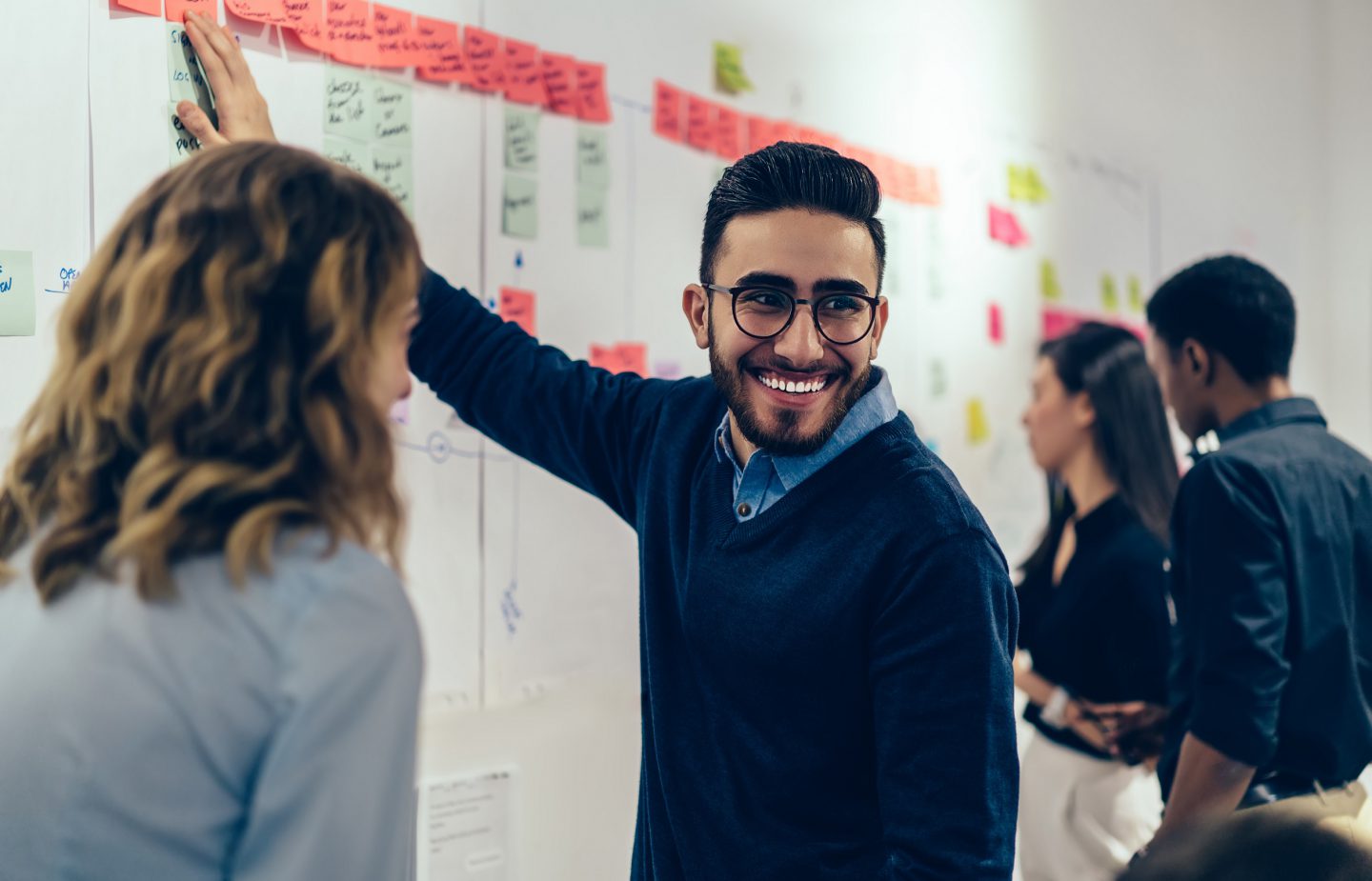 Church and State: How Publishers’ Editorial and Sponsored Teams Collaborate

Church and state, sponsored and editorial. It’s sometimes hard to identify the separation between a publisher’s editorial branch and its sales arm, especially with the advent of products like branded content and advertorials. At some publications, that division is an iron gate; at others, it’s a fine line. 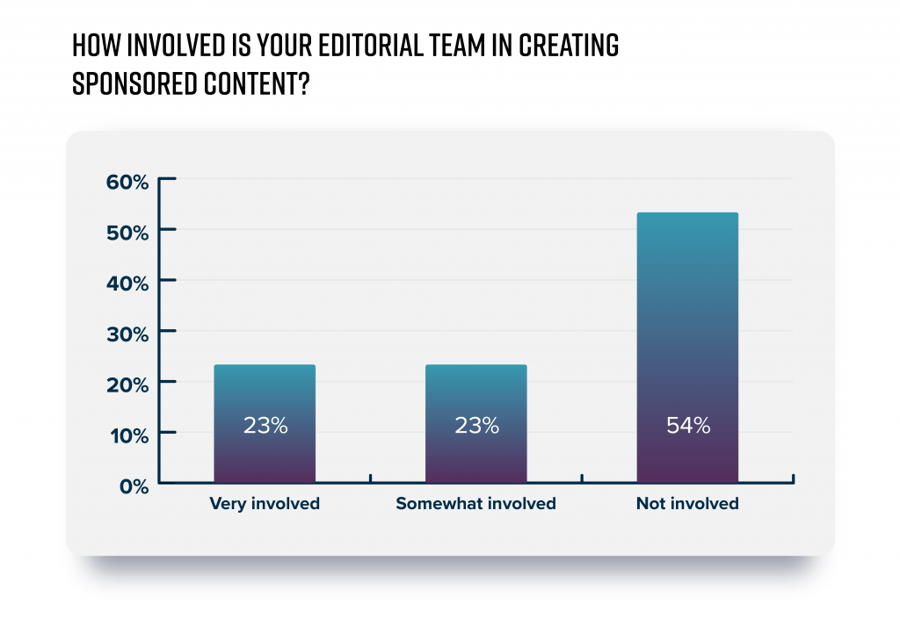 The level of that involvement varies: one respondent explained that their company will not use in-house editorial staff to work on branded content, and they often hire editorial journalists and freelancers to assist their clients.

Others shared that their editors may help with initial idea generation, such as during the RFP process, but not the actual creation of the content. Only 17% of respondents indicated that their editorial team was very involved when pitching clients or responding to RFPs, while 37% said they were somewhat involved in the initial pitch stage.

It’s easy to debate the merits of mixing church and state. On the one hand, editorial staff understand their audience better than anyone and can craft content that reaches (and engages) the maximum number of viewers, raising the ROI of potential ad buys. On the other, a neutral editorial position is vital to the prestige and longevity of a publication, and mixing the two could create negative opinions among readers.

We wanted to dig a little deeper into the conversations around sponsored content and editorial. The below questions and responses aim to inspire discussion about how teams do — or perhaps, should — collaborate on content. 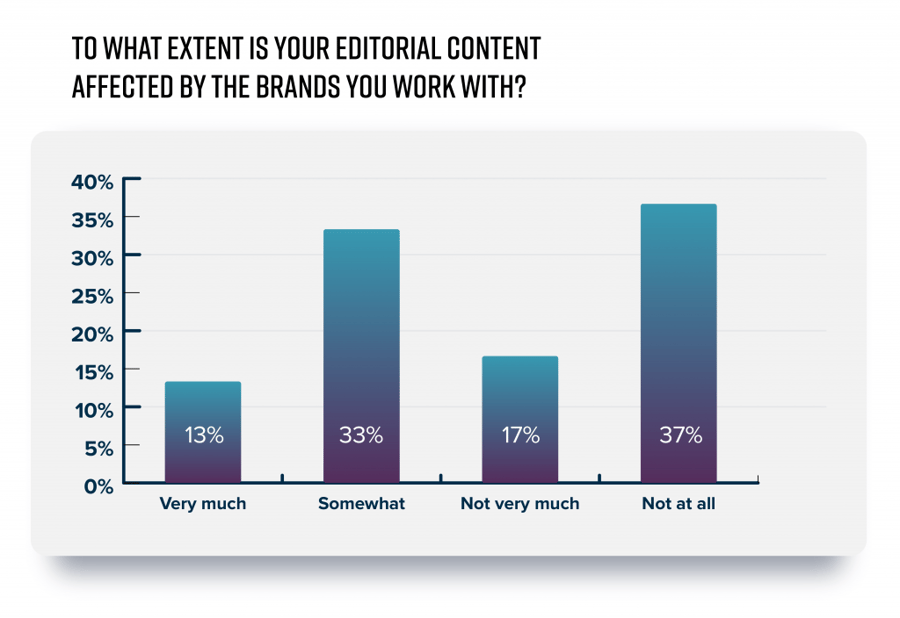 The idea that editorial content is even a little bit influenced by the brands a publication works with is the main cause for the whole debate. And yet, 33% of respondents stated that their editorial is somewhat affected by the brands they work with; another 13% said it’s very affected.

This cause and effect doesn’t affect all verticals equally, nor is it necessarily negative; respondents in the product review space were the most vocal about how the brands they work with affect the content they’re able to create.

For Joel Vosburg, Advertising Account Manager at Gripped Publishing, it’s more a matter of accessibility than anything else. He gives an example from their publication, Running. “We don’t review products from ON Running since they do not provide us with clothing, shoes, etc. the same way [that brands like] Nike, Asics, [and] UA do. Tough for us to provide editorial coverage when the brands do not work with us.”

Responses indicate that separation is stricter when it comes to news coverage.

“Lately, we’ve had a lot of brands trying to get ”bad press” removed from our website using their booking with us as leverage,” explains Pierce Borne, Client Partner Manager at Narcity. To avoid all unethical partisanship and remain in a neutral editorial position, the publication put a policy in place that states that companies cannot and do not influence editorial coverage. If one of Narcity’s advertisers becomes newsworthy, they will be treated as any other company and invited to comment on the story.

He explains, “Audience is our number one focus, all the time. It’s our job to report what matters to them and if one of our partners becomes newsworthy, good or bad, there’s nothing the sponsored team can or should do about it other than communicating the event with the partner in question. This shouldn’t affect our relationships as long as the report is accurate and fair to everyone — especially the audience.”

Sharing a Home, a Voice and Even a Sponsor?

Responses to additional questions in the survey paint a picture of what publishers are currently experiencing at their organizations. It also gives us a glimpse of how they hope to see the industry evolve in the future. 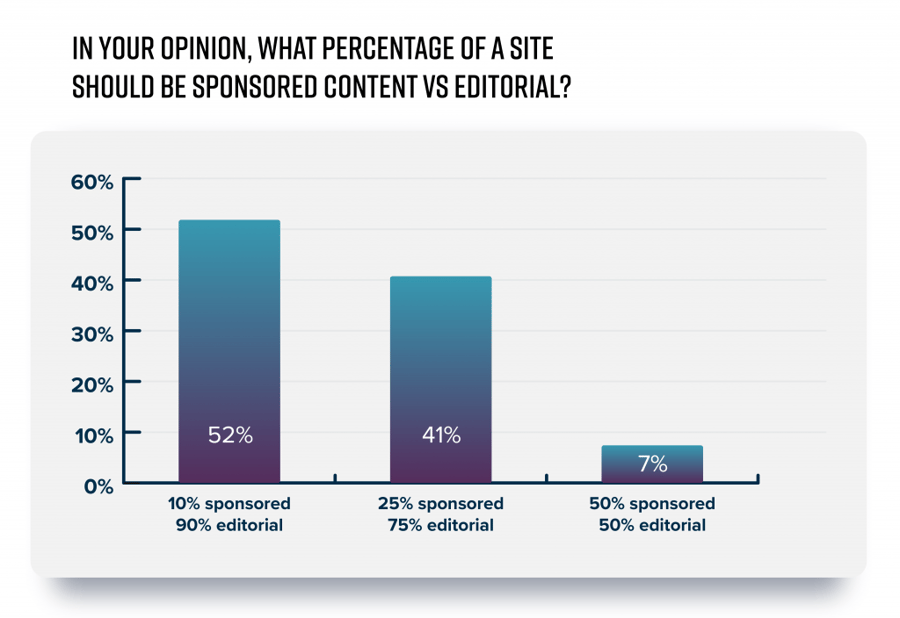 Respondents clearly feel that editorial coverage should dominate a publication’s site, with only a fraction of the content being sponsored. The same sentiment extends to a publisher’s Facebook feed: 57% of respondents believe it should be 10% sponsored, 90% editorial. Another 14% feel there should be no sponsored content on a publication’s Facebook feed. Opinions were somewhat more flexible if the site was lifestyle-based instead of a news publication.

For Nikki Csek, CEO at Csek Creative (which supports NowMedia), the answer for how much sponsored content to include on your site is, “As much as your readership is interested in engaging with. Sponsored content can be as interesting and sometimes more interesting than day-to-day editorial content.”

She continues, “You need to be keenly aware of what your readership wants and does not want. The stats tell you, if you are willing to listen.” 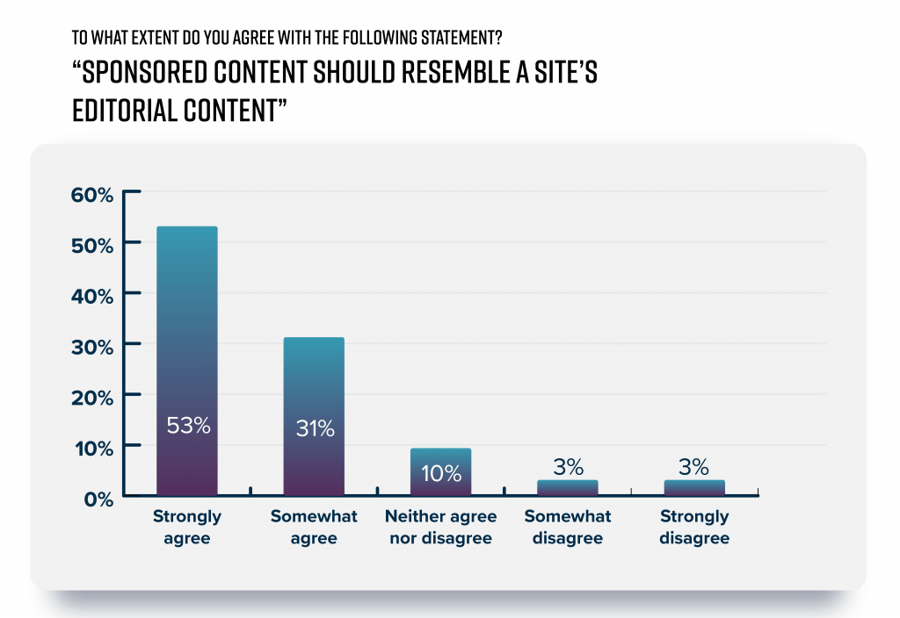 This question elicited the strongest positive response out of any others in the survey. Just over 50% of respondents strongly agree that sponsored content should resemble a site’s editorial content. This aligns with readers’ opinions, as 79% of audience members prefer ads that blend into the page to obtrusive banners, according to a Verizon Media study.

Mindy Claggett, an Associate Editor of Branded Content at COX Inc., says this sentiment even defined the structure of her role.

“The powers that be decided that my role should report up through editorial primarily because I would be creating content, so they felt I needed to be on the content team. Additionally, they wanted to ensure that even paid content was consistent with the brand standards for our publications and sites, and the content would fit the brand voice.

“We want to be sure the content would be a good fit for our audiences. That’s the lens through which I view all topic ideation that I do for clients.” 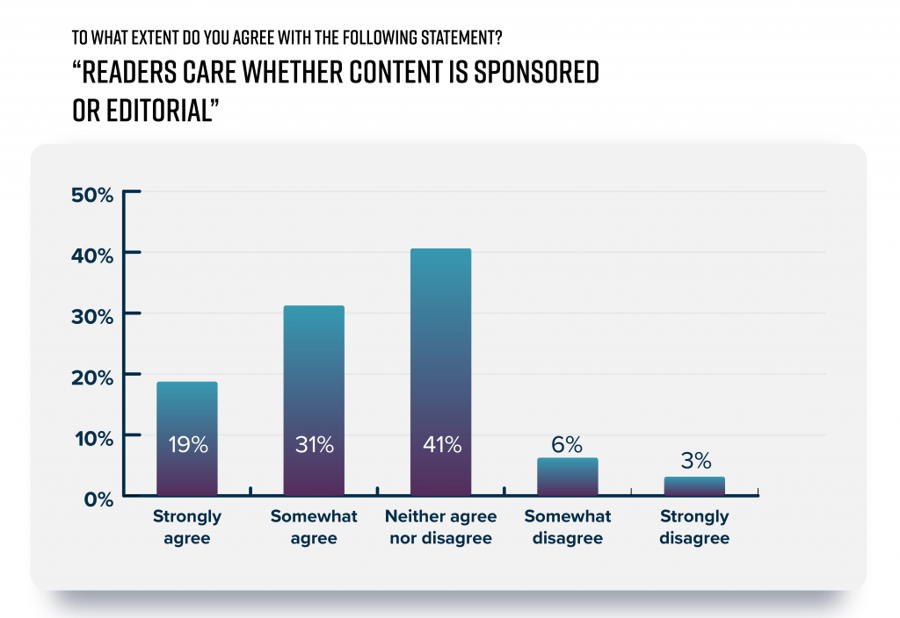 Many of the respondents agree (somewhat or strongly) that readers care whether content is supported by a brand. While it’s true that millennials dislike traditional advertising, 58% of them will watch ads if they support their favorite digital personalities. The content still needs to feel authentic, entertaining and useful, however.

The economics of sponsored content aren’t lost on audiences, says Vosburg. “The more I see branded content online and in print, the more accepting I find readers have been,” he states. “Readers understand the trouble some publishers find themselves in these days and know that financial support through content is a way to help this.” 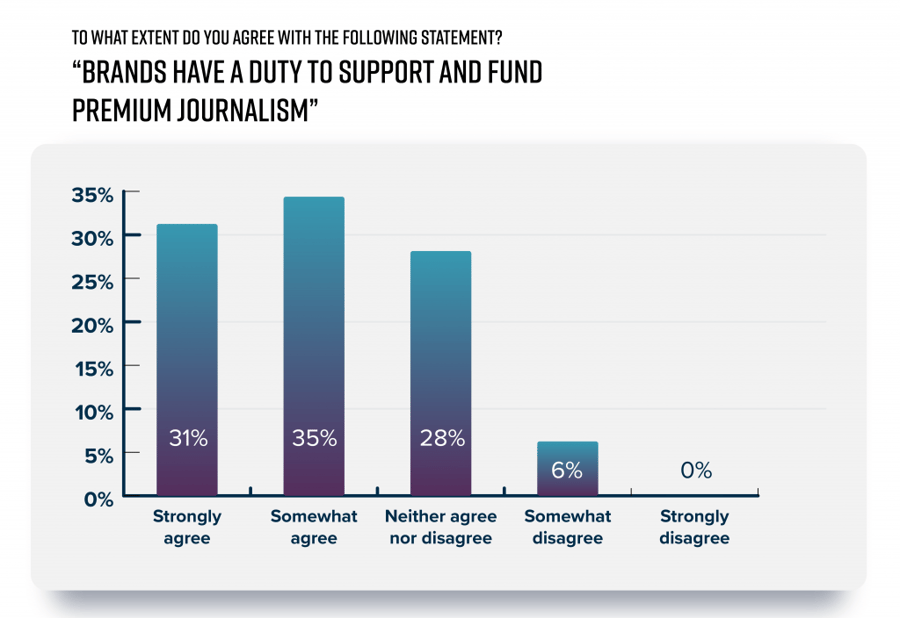 That same need is apparently felt by the survey respondents, too. Almost 70% of them agree that brands have a duty to support and fund premium journalism. A similar number feel that publishers should allow advertisers to promote existing content that might align with their goals and values — even if it’s not sponsored.

Branded content is a key revenue stream for publishers. Journalism, on the other hand, can be incredibly expensive. But investments in journalism are required should branded content continue to be successful.

When a brand is associated with an authority like a publisher, our brains take that as a signal that the company is equally reputable and trustworthy. This is why marketers see 50% higher brand lift when they distribute content through a publisher’s network rather than their own. But if the strong editorial voice of a publication begins to waver, it loses its credibility, which in turn damages the potential of the advertisers who work with it.

There’s a desire for brands and publishers to collaborate on larger, more important journalistic projects in the future. Where and how we draw the line is still up for debate.