2014 may very well go down in history as the year that native advertising officially grabbed a seat at the mainstream media table.  You couldn’t attend a conference, let alone a boardroom meeting, without coming across one of the many terms that have come to describe the blending of editorial and advertising.  Sponsored content, native advertising, branded content, advertorial, brand publishing and the catch-all umbrella term, content marketing.  Regardless of what you call it, 2014 was a watershed year that brought journalists into the boardrooms and advertisers into the newsrooms.

The space has its proponents and its fair share of detractors, as high profile journalists such as Andrew Sullivan and John Oliver grabbed industry headlines denouncing the format.  Examples of programs that missed the mark became the poster children of why church and state exist in the first place.  However, with every miss there were a series of triumphant successes.  Campaigns that proved that when a great storyteller and the right brand come together, the resulting product can achieve something of which the lowly banner ad never could; the attention and engagement of an audience.

With this in mind, Pressboard wanted to celebrate the programs that raised the high watermark for brand content partnerships this year.

Content, as with most creative executions, is highly subjective in nature, and for this reason no “best of” list can ever claim to be perfect or exhaustive.  While we can (and should) debate who is deserving or not of making the list, these campaigns exemplify the intent of content marketing, to provide an interesting story that either helps, educates or entertains the reader, and therefore builds affinity and awareness for the brand.

In order to cull the best from the rest our approach was to start with a broad list of content pieces and systematically narrow the field until 10 of the best examples from the past year remained.  We started with 1,500 individual pieces, from publishers and brands across America.  Along with our friends at BrandTale we narrowed the field down to 150 pieces of true collaborations between the publisher and the brand.  We then interviewed publishers, brands and agencies, asking for their opinion and insight into the content and the results.  After weeks of research and a continuous process of elimination, we arrived at our final list.  Here they are, in no particular order;

Concept:
Narrated by Buzzfeed Motion Pictures President Ze Frank, the video tells the story of an older cat welcoming a new kitten to the household.

Why it’s on the list:
With over 18M views on YouTube in under 6 months the Dear Kitten video not only went viral but also brought in buyers.  Nielsen research confirmed that when asked “How likely are you to consider buying wet cat food for your cat?” the brand saw a 57.8% brand lift among people exposed to the video when compared to the control group.  The success even spawned a sequel called Dear Kitten: Regarding the Dog which garnered over 7M views in its first month.

GE + The Economist: GE Look Ahead

Concept:
A daily look at the innovations transforming global business, GE Look Ahead combines the well-respected editorial standards of The Economist with the forward thinking innovation of GE.  Over 1,000 individual pieces have been created to date, covering everything from telemedicine to the promise of hypersonic flight.

Why it’s on the list:
GE has already become recognized as a leader in brand content, and the GE Look Ahead program, according to Jason Hill, Global Director of Media & Content Strategy at GE, is considered one of their best.  The Award winning program is matching and often beating The Economists regular editorial content, an achievement onto itself.

Concept:
The #NoSweat program executed a marketing trifecta, Content, Community and Commerce.  The articles provided the audience with helpful and entertaining ways to live a #NoSweat life, while the hashtag #NoSweat encouraged readers to participate in the creation of new content on social media.  Gillette also became the presenting partner of a custom curated clothing selection of the Thrillist owned JackThreads men’s fashion ecommerce site.  The selection focused on dark colored clothing, because if you’re not leaving behind deodorant marks, you can wear what you want.

Why it’s on the list:
Thrillist has shown an uncanny ability to reach and influence young males through their content and the partnership with Gillette was no exception.  The addition of a custom sale integration on JackThreads demonstrates how content and commerce can be blended in unique ways and pushed this program onto the list.

IBM + The Atlantic: How Technology Transforms 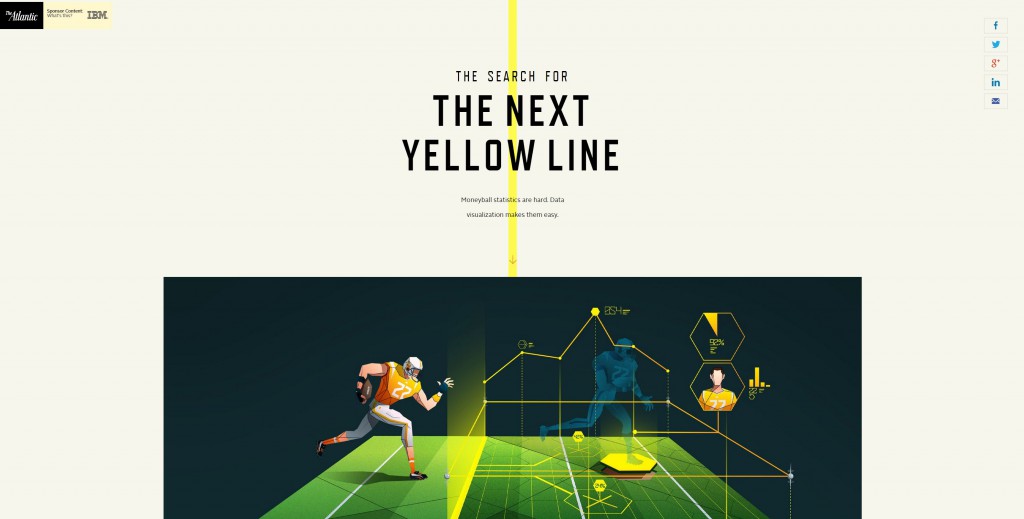 Concept:
As Moneyball brought to light, data can be used to understand more than just business.  The Atlantic and IBM teamed up to uncover how technology transforms the world of sports.  The series provides analysis and statistics exploring How apps may change your baseball swing and how data can protect the world’s most valuable human real estate.

Why it’s on the list:
Taking millions of data points and turning them into shareable content is no easy task.  IBM and The Atlantic provide a unique use case for data visualization told in a way that entertains, informs while integrating IBM’s technology chops.

Concept:
Hearst Integrated Media, Mark Burnett’s VIMBY/ONE THREE MEDIA, and Revlon celebrate bold, provocative women in the new competition series, #GoBOLD.  Hosted by Laverne Cox, the Emmy-nominated actress and star of Netflix’s “Orange is the New Black,” each webisode introduces a new mentor who will share a few secrets of success and present a challenge designed to help contestants achieve their goals.

Why it’s on the list:
The #GoBOLD videos integrate Revlon products organically and place Revlon at the center of provocative conversations. The video series leverages the star power of Lavern Cox, the production savvy of Mark Burnette’s studio and the scale of Hearst publishing including distribution across Cosmopolitan.com, ELLE.com, and MarieClaire.com. 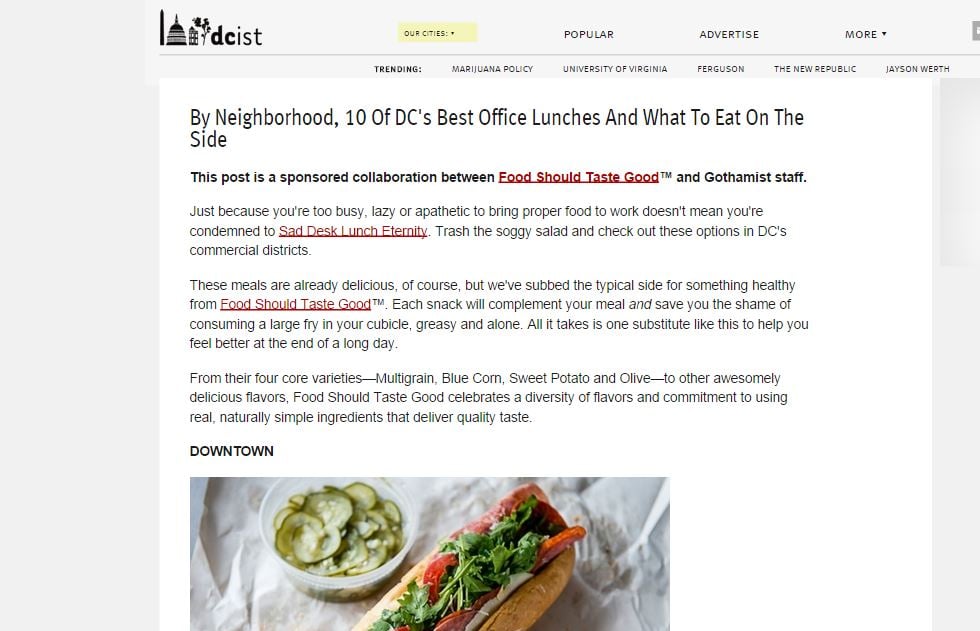 Concept:
Taking a cue from Food Should Taste Good’s message of quality and good taste, Gothamist Media’s DCist.com researched and ranked the Best 10 Office Lunches in DC by neighborhood.  Taking it one step further DCist integrated FSTG’s product, a line of great tasting snacks, by pairing each best lunch with the perfect side snack from FSTG.

Why it’s on the list:
This piece hooked readers, who were receptive to FSTG’s message of quality and good taste.  It was not only the best-performing DCist advertorial of all time, it was also the top story on DCist the week of September 15th, out-ranking all editorial content.

Cuervo + Complex: Have a Story

Concept:
Playing off of Cuervo’s Have a Story platform, the brand worked with ComplexTV to uncover the stories of exceptional people across America and viewed their cities through their own personal lens.  Tattoo shop owners, photographers, designers and entrepreneurs from New York to LA give you a taste of their city, and a taste of Cuervo.

Why it’s on the list:
The brand leverages its own platform to highlight the stories of others, bringing their consumers lives and the way they see their cities to the forefront.  High quality video production and seamless brand integration works well for the brand, the publisher and most importantly, the viewer.

Concept:
With over 30 years of stories as the sponsor of Team USA, the collaboration between United Airlines and NYT’s TBrandStudio blends flight data into the history of the Olympic team in dozens of unique applications.  Find out how many Olympic athletes are from your state or pack a plane with athletes to learn about equipment weight.  A chronological timeline of Olympics through the years shows flight paths to each Olympic city and surfaces New York Times articles that told the story of the games.

Why it’s on the list:
The New York Times continued efforts in Native advertising, including their work with Netflix and Shell, are slowly winning over the skeptics.  The piece provides an intersection point between NYT’s historical news coverage of the Olympics and United’s involvement as a key sponsor of Team USA.  Sharing of assets between United, Team USA and the NYT makes the piece a collaboration that is stronger than the sum of its parts. 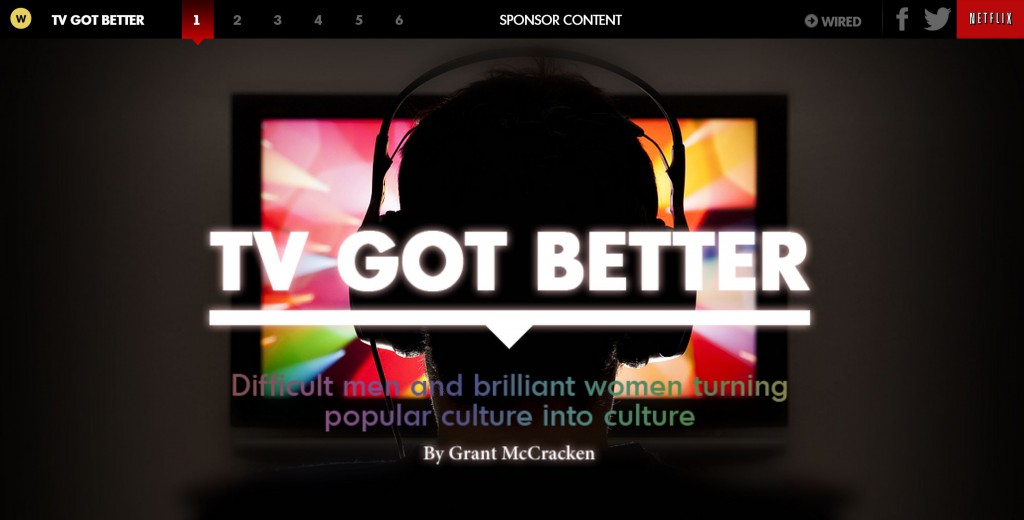 Concept:
Wired and Netflix take a look at how TV viewing has changed throughout history, from the Golden Years of the 40’s and 50’s to the transmedia evolution of the early 2000’s to the current migration of Hollywood’s movie actors lending their talent to the small screen.  Interviews, trend watching and podcasts are intertwined into the multimedia documentary-style experience.

Why it’s on the list:
According to ad measurement platform Nudge the Netflix article on Wired has been shared over 130,000 times.  Conde Nast (Wired’s parent company) has confirmed the share numbers and has benchmarked the engagement time on the Netflix story at 96% above industry averages for advertising content.  Placing the Netflix brand squarely in the conversation about innovation in television, while at the same time creating a story that readers want to share exemplifies the promise of content marketing.

If you were counting, you may have noticed that only 9 brand content partnerships are outlined in this list.  As mentioned in the methodology, the subjective nature of content means that this list is neither prefect nor exhaustive.  As with any attempt to rank creativity, the beauty often lies in the eye of the beholder.  In the spirit of collaboration, the 10th case study is up to you.  Tell us which piece of brand content partnership we missed and why it deserves to be here.

There’s a lot of talk about ad blocking in the advertising and..

“Native advertising,” a term first coined by Fred Wilson at the Online Media, Marketing, and Advertising Conference in 2011, is popular..