The old adage says, “beauty is in the eye of the beholder” ­— but what if that eye has been conditioned to see a very narrow standard of beauty?

There are a number of factors that inform an individual’s idea of physical beauty. If you live in an area of the world that has access to mainstream media, however, this is likely one of the strongest influences on your definition of beauty, whether you realize it or not.

Some brands are actively working to shift the beauty standard and open up the definition to be far more inclusive. Dove is one of them.

Dove has long been a leader in the branded content space, and “Mastectomy Scars,” the campaign they created with Mic, continues that legacy. The company believes that beauty should be for everyone, and the content furthers that message by exploring how breast cancer survivors are challenging narrow beauty stereotypes.

Mic is well-positioned to be a partner for Dove thanks to their brand newsroom, which was created to help them support brands through traditional journalistic tactics.

Breast cancer survivor Chiara (@beautythroughthebeast) knows that there's beauty in strength – and in scars. “I see all the different folds and all the different characters of my scars. I see them. I’m still a person. I’m still a woman…I’m still alive.” ❤️ Beauty takes form in all shapes, sizes and experiences – which is why we are proud to share the voices of all women. Watch Chiara’s powerful story here, and share yours with us Made by @mic and @Dove #Dove #Mic #RealBeauty #BreastCancer #Confidence #StrongWomen

A post shared by Dove Global Channel 🌎 (@dove) on

“The content produced by Mic is really meant to educate, to embrace diversity, to embrace inclusivity, and really empower our users as they consume the content,” says Nick Heitz, Vice President of National Sales at Mic.

We sat down with Heitz and Nina Van Brunt, Executive Producer & Creative Director, Brand Newsroom at Mic, to discuss how the campaign furthers the company’s goal of redefining beauty standards.

Pressboard: Can you talk a bit about how Mic started?

Nick Heitz: The company was founded in 2011 as Policy Mic. Our first ever motto was “reshape the world,” and now today our purpose is to reveal and amplify stories for change-makers who reshape the world. Mic today exists as an entity who really wants to talk about purposeful stories, who can uncover topics with the aim of doing really great journalism.

Our producers are basically brand journalists. That’s how we frame it. They are sourcing stories, they have pitches every week the same way a reporter does. They just have a different beat and better funding for their content.

What is Mic’s primary audience, and has it changed over time?

Nina Van Brunt: We had that conversation internally as a brand since we’re growing up, too. The millennial research that we were doing, we realized, is not necessarily confined to just the actual age demographic of millennial — it’s a millennial mindset. It’s the people who care about those types of things that are attributed to millennials. We are a brand that represents inclusivity, and we didn’t want that to have any confines of age on it. 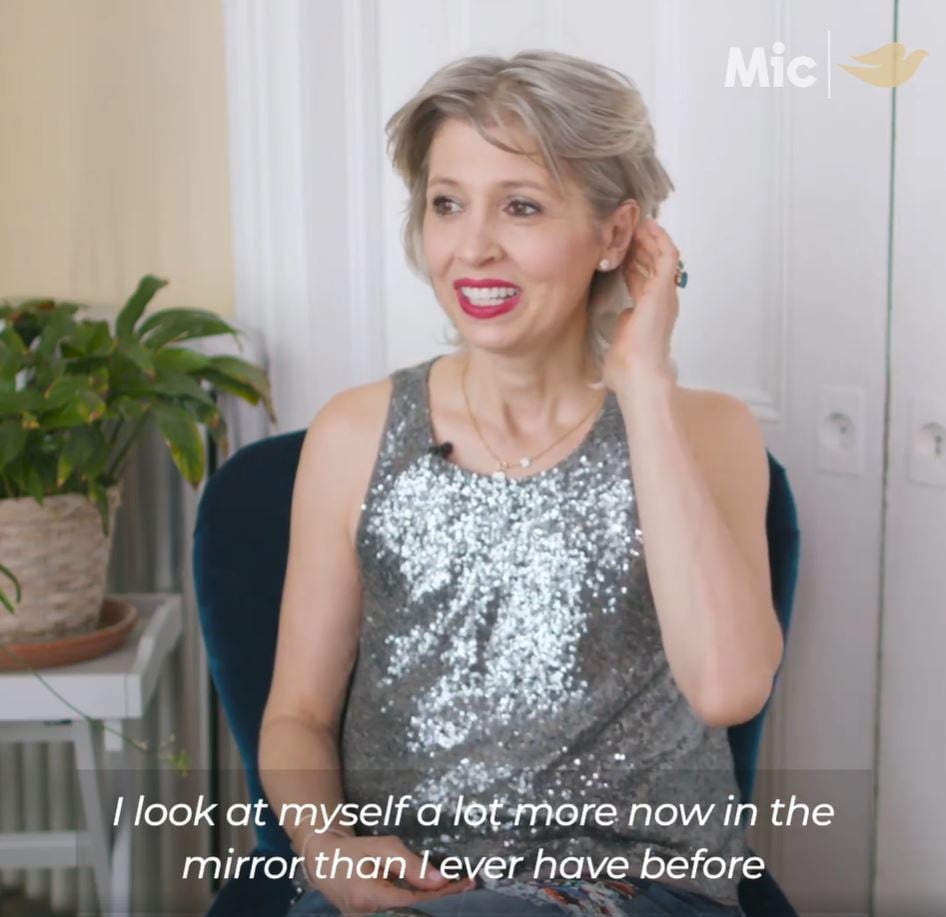 Heitz: When you actually start to dive into that roughly 84 million number [of millennials], you start to realize that it’s an incredibly diverse generation, and that you can’t speak to them with a one-size-fits-all approach. So to Nina’s point, [we’re] really starting to figure out what is the mindset within that generation that can cut across demographics, then figure out how we can continue to build a media company that tells stories geared towards that mindset in a way that allows us to truly differentiate ourselves.

Why is Mic appealing to certain brands, and which types of brands seem to resonate best with Mic?

Heitz: When we’re in meetings and we’re introducing Mic to people who are not familiar with us beyond just seeing the logo in their newsfeeds, we really like to lead with our purpose and commitments, and then actually our editorial stories that are indicative of those — really using them as the continuous North Star.

If you can tell a really good story that doesn’t necessarily just hawk a product, that’s ultimately going to win the day.

We’re not just this massive company who’s going to chameleon and say that we’re everything for everyone, but rather we take our values, identify brands who have those shared values and then really use that as the foundation for everything we do.

Let’s talk about Dove. Could you speak more about the campaign?

Van Brunt: Dove really revolutionized brand marketing with the ‘Real Beauty’ campaign. They basically started the whole body positivity movement. Which is incredible, because that’s such a mainstream thing that so many brands are trying to plant a flag in, and it’s really Dove’s. They’ve been innovating since the beginning of the 20th century, in my opinion.

We’re joining @babydovecare in celebrating @mothercareuk’s #BodyProudMums campaign #Regram Starring 10 new mothers, each with their own story, @MothercareUK’s latest campaign #ProudBodyMums celebrates the reality and natural beauty of post-birth bodies 👏 Helping to normalize the experience of being a new mother and breaking the unrealistic beauty standard of ‘bouncing back’ to your pre-baby body (in a matter of weeks), the portraits show there’s no one-size-fits-all approach to motherhood, only yours 💙 #Dove #RealBeauty #DoveLoves #Mothercare #BodyProudMums #Postpartum #Mothers #BodyPositive #Beautiful #PostpartumBody

A post shared by Dove Global Channel 🌎 (@dove) on

We came to them with a story about a woman who had a double mastectomy and wanted to talk about how she feels about her beauty. We thought it would be an incredible story for Dove to bring to its audience and its viewers. It ended up being a wildly successful video in a number of ways. This breast cancer awareness month campaign is just one example of how ahead of the curve Dove has been in terms of brand storytelling. Breast Cancer Awareness Month belongs to everyone, but they really had a powerful voice and story within that native, which made them a trusted voice to their viewers.

We’re not just this massive company who’s going to chameleon and say that we’re everything for everyone, but rather we take our values, identify brands who have those shared values and then really use that as the foundation for everything we do.

Heitz: If you can tell a really good story that doesn’t necessarily just hawk a product, that’s ultimately going to win the day, no matter what. So we’re really committed to just using that as our blueprint, and if we can find partners like Dove who are committed to amazing storytelling, that have our same values, then it’s a win-win for everybody.

Van Brunt: Our producers are basically brand journalists. That’s how we frame it. They are sourcing stories, they have pitches every week the same way a reporter does. They just have a different beat and better funding for their content.

I think the reason why we’re here is the brand newsroom program, which really took that values-driven ethos that we have and matched it up with brands that also have that same ethos, and figured out a way to bring that to life in a way that resonated with our viewers and hopefully on a broader scale as well.

Can you speak to what the vision of Mic is from a business side?

Heitz: A lot of publishers right now are fighting a situation where branded content is not necessarily the absolute must-buy item for marketers. A lot of marketers are investing in lower and lower funnel tactics that allow them to actually see real time ROI. So, for publishers who are playing in the mid- to upper-funnel space, where it’s more storytelling, you really need an ad product that can justify the investment.

Our thesis is that if we continue to really use the brand newsroom as our differentiated Mic-specific offering in the marketplace, and double down resources, time and attention there, then that’s hopefully our path forward in terms of continued monetization. Every program that we’ve done for the most part is in its relative pilot phase, so every time we’re learning something new and finding a new algorithm change, or identifying a new research partner who can bring even more insights to the table.

We do a book club at Pressboard, so we’d like to ask you both what your favorite book of all time is.

Van Brunt: My favorite book of all time is Dracula by Bram Stoker. For its time, it was a very creative way to tell a story. I don’t know if you guys have read it, but it’s all written in POV of the person who is either writing the letter or the diary entry, or you’ll see press clippings from something that happened, in order to build this story. You are omniscient, and the characters in the story are not. It’s also one of the best suspense thrillers of all time.

Heitz: I loved Bad Blood, which was all about Theranos and Elizabeth Holmes. I read that book in two days, which is very fast for me. The way I have taken the learnings from that is really just, being genuine, being humble and making sure that any time you’re in business, you’re being as transparent and forthright as you can.

This newly updated infographic highlights the most important branded content benchmarks for marketers.

There’s a reason why Pressboard’s..

November 16, 2016
by Jerrid Grimm
by
They say that if you’re successful in the world of content marketing, you’re either data-driven or lucky. And while we could all use a..
2019 Branded Content Benchmarks Report (Infographic)

This newly updated infographic highlights the most important branded content benchmarks for marketers.

There’s a reason why Pressboard’s..