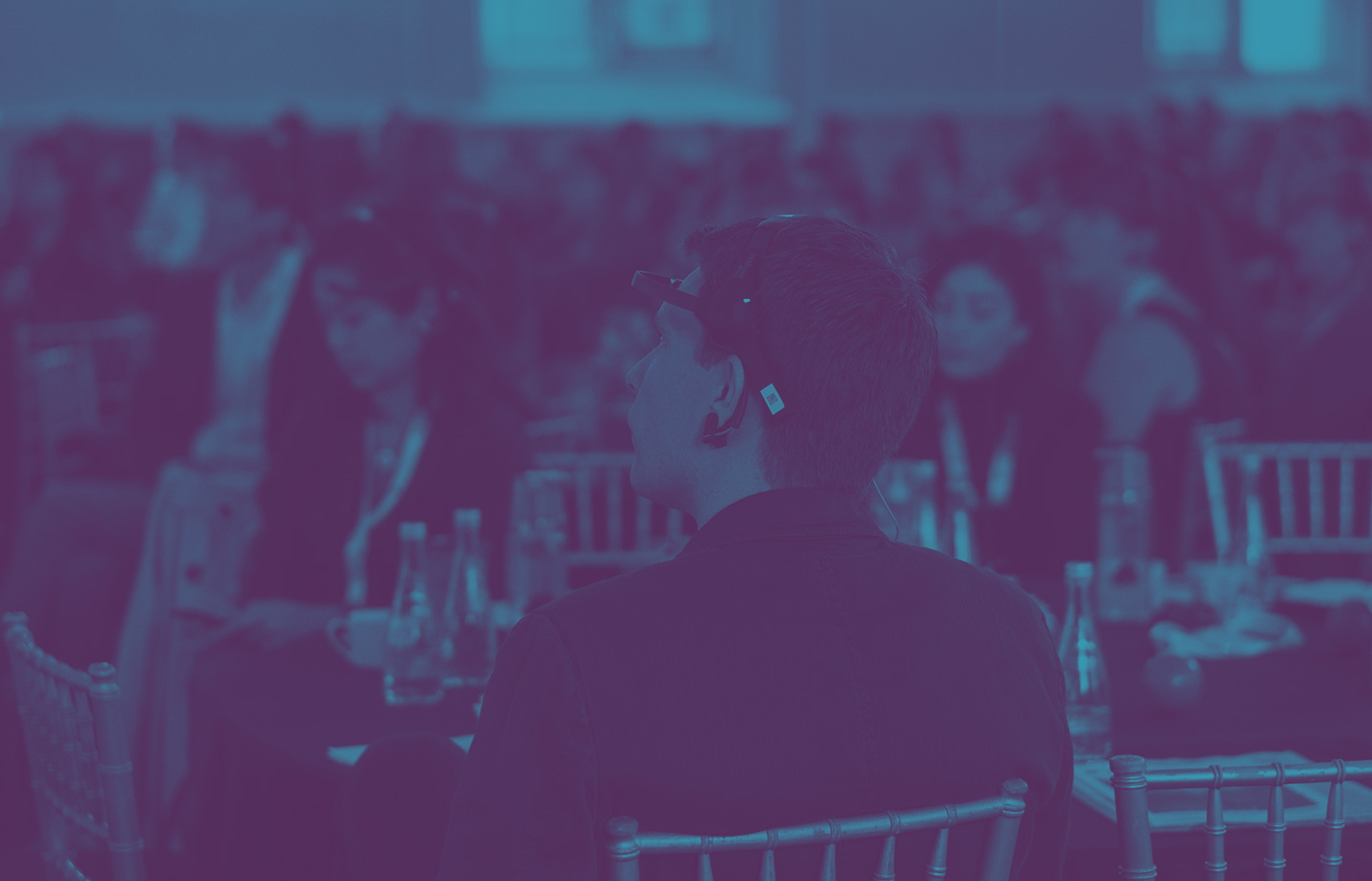 This story starts with one big question: what is going on inside a consumer’s brain when they engage with branded content?

We all know by now that branded content works. At Pressboard, our platform collects thousands of data points every day that proves it. However, we wanted to know what was happening behind all of those clicks, views and conversions — on a neurological level. What is it about branded content that consumers find engaging, and how does its effect on the brain compare to other types of media?

As a first step in answering those questions, we teamed up with the experts at Brainsights, a technology and human insights company based in Toronto. Together we analyzed a test group’s neurological reactions to three branded videos created through Pressboard’s platform for Toyota BC Dealers. We then compared it with reactions to top TV programs and advertisements, as well as social performance data.

The results were incredible: from a neurological standpoint, the branded content performed on par with top rated TV shows like This is Us and big budget ad campaigns from Apple. In comparing the brain scans to actual performance data from Facebook, there was also a direct correlation between drops in alertness/attention and the videos’ average watch times. 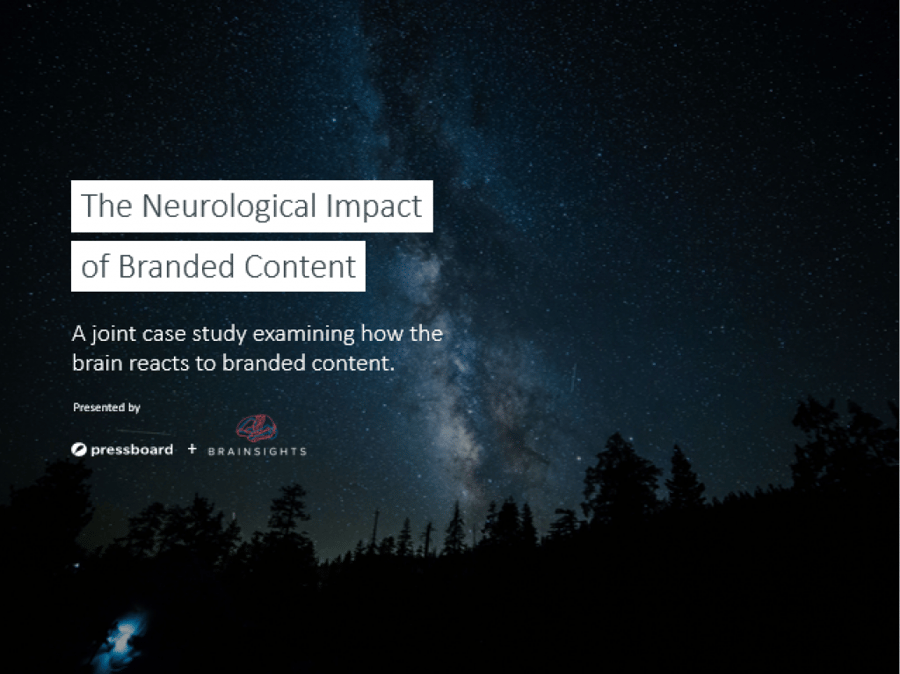 We’ve highlighted some of the most striking insights below, but you can also download the full case study report.

Inobtrusive headsets with small metal electrodes on the scalp measure that electrical activity, which is recorded, amplified and displayed as waves. Waves are characterized by their respective frequency and amplitude. 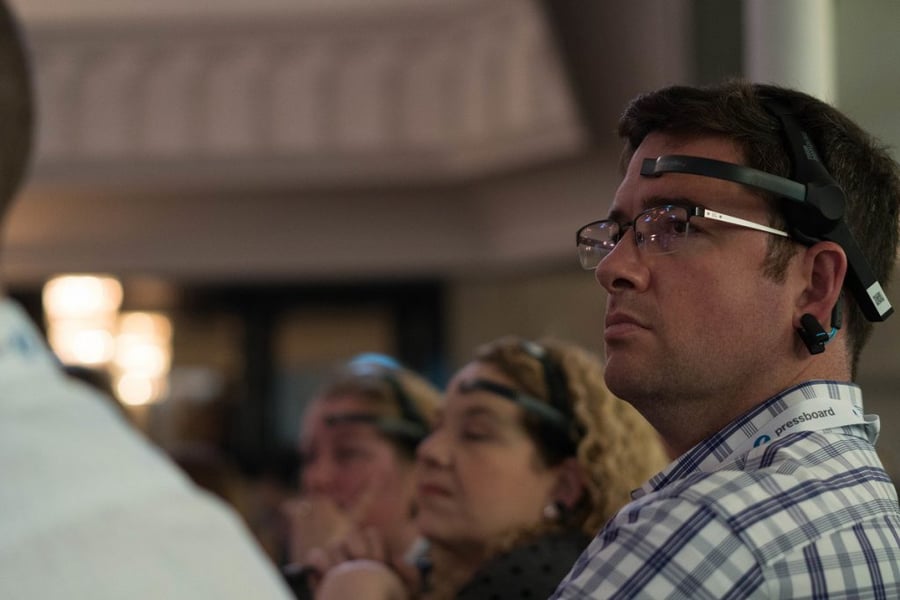 By measuring the unconscious brain activity of consumers as they view branded content, and marrying this with behavioural data, we can identify the neural correlates of content success.

We measured all three neuromarketing metrics for three branded videos published through Pressboard’s platform for Toyota BC Dealers: Prius Insanity Test, by Vancouver is Awesome; Taco Road Trip, by Daily Hive; and 8 Reasons to Buy a Hybrid­, by Kelowna Now.

Over 150 participants making up a general population sample were scanned while watching a one-hour reel of video content comprised of TV clips, commercials and Toyota BC Dealers’ branded videos. The content was viewed by the sample audience on TV, Desktop and Mobile

We chose the top entertainment content and advertising in the world to understand how branded content compared and competed, both from a commercial and entertainment perspective.

Toyota BC Dealers’ branded videos performed at par neurologically with some of the highest rated content on television, and some of the most celebrated commercial content. From the neural graph for Vancouver is Awesome’s Prius Insanity Test video (below), you can see that consumers engage early, both with the unique premise and with the relatable characters, showing strong lift in Attention, Connection and Encoding. The opening 15 seconds are the equivalent of a world-class 15s commercial, from a neural perspective. 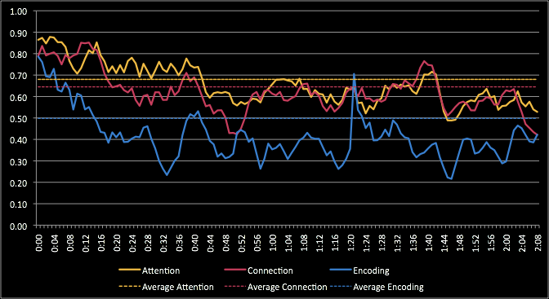 Moments involving saving money on gas and being good for the environment can double Attention, Connection and Encoding values among consumers. When analyzing the most engaging moments of the Toyota Prius Insanity video, there are clear spikes in all three metrics when the content focuses on product benefits like saving on gas. 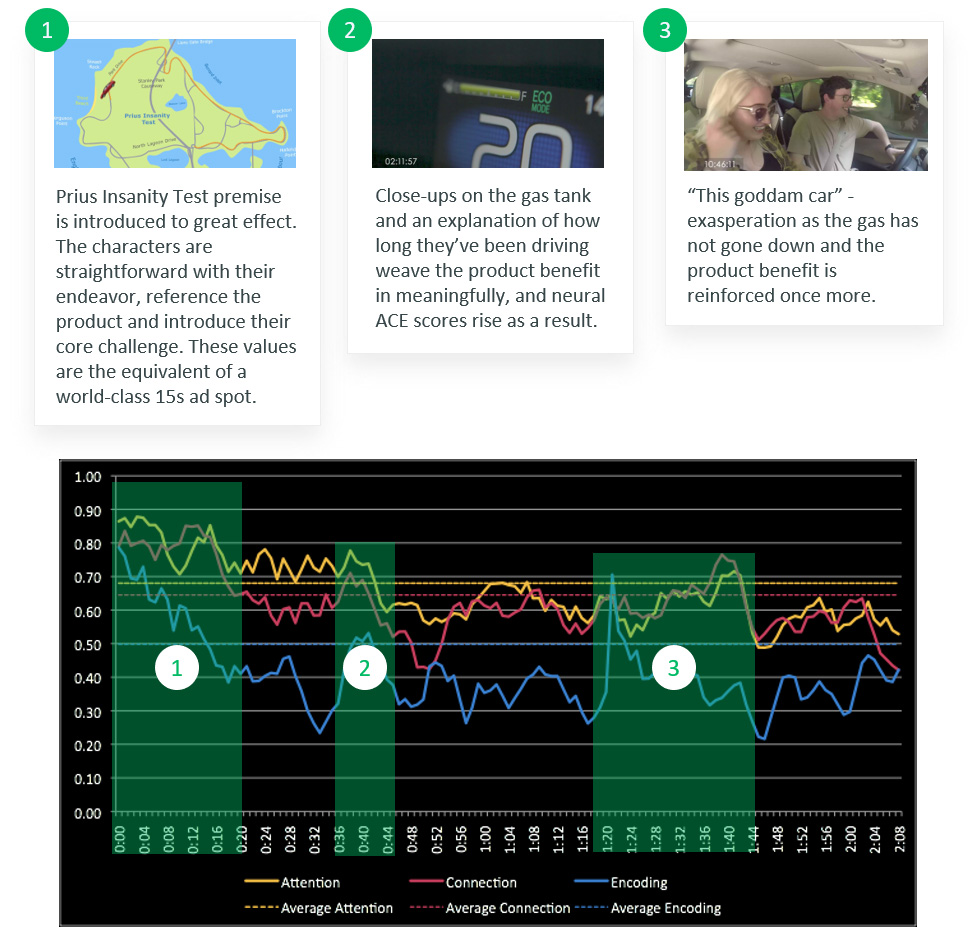 Prius Insanity Test shares its premise right away. It’s clear from the start what the pair are attempting to do, and the audience is under no illusion as to what might follow. Contrast this with both Daily Hive’s Taco Road Trip and Kelowna Now’s 8 Reasons to Buy a Hybrid videos. With Taco Road Trip, the piece starts with a joke about a hybrid taco, which engages audiences at the unconscious level, but it’s another several seconds before the hosts introduce the premise, at which point audience Attention and Connection are already dropping.

This case study is a first step in determining what it is about branded content that consumers find engaging, and how it compares to other types of media. The videos created through Pressboard’s platform by Toyota BC Dealers demonstrated that branded content has the potential to perform at high levels of effectiveness from a neurological perspective, both as a form of entertainment and as a medium for brand messaging.

Are lifestyle aspects of branded content as high-performing in other industries as they are in auto? Also, do these insights hold across specific audience segments? Our aim is to answer these questions and others through additional research.

Click here to download the full case study report and get all the data we analyzed. If you wnat to learn more about branded content we recommend you review Pressboard's Compelte Guide to Branded Content.

Pressboard would like to thank Brainsights, the Toyota BC Dealers and Elevator Strategy Advertising & Design Inc for their collaboration in bringing this case study report to life.

How to Decide if Your Brand Should Create Sponsored Content

We’re well into the era of sponsored content, with more and more brands recognizing that consumers find content more engaging than..